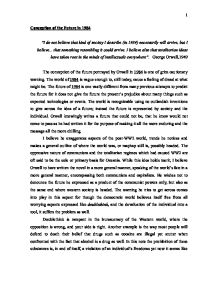 Conception of the Future in 1984

Conception of the Future in 1984 "I do not believe that kind of society I describe (in 1984) necessarily will arrive, but I believe... that something resembling it could arrive. I believe also that totalitarian ideas have taken root in the minds of intellectuals everywhere". George Orwell,1949 The conception of the future portrayed by Orwell in 1984 is one of grim cautionary warning. The world of 1984 is vague enough to, still today, cause a feeling of dread at what might be. The future of 1984 is one vastly different from many previous attempts to predict the future for it does not give the future the present's prejudice about many things such as expected technologies or events. The world is recognizable using no outlandish inventions to give across the idea of a future; instead the future is represented by society and the individual. Orwell knowingly writes a future that could not be, that he knew would not come to pass as he had written it for the purpose of making it all the more enduring and the message all the more chilling. I believe he exaggerates aspects of the post-WW2 world, trends he notices and makes a general outline of where the world was, or mayhap still is, possibly headed. ...read more.

The great magnates of the Western world are as efficient as the Soviet leaders in maintaining themselves where they are, resorting to underhanded tactics to prevent others from toppling them. What is the greatest difference? We are the free, and thus our actions are acceptable, yet they are the totalitarian and evil whose methods are unspeakably corrupt and unthinkable. I doubt he believed the world of 1984 would come by that date yet it is in the exaggeration that lies the warning. It would likely have had little effect if the book spoke of a society resembling the present one, as said before the hyperbole is not in the technology and material goods but instead in the society. It seems preposterous that such a society could come to exist in the way it seemed preposterous to reach the moon. Something utterly alien yet, when analyzed well possible. What is it about 1984 that is so ghastly? I don't believe it is the environment; it is merely a backdrop for the story of humanity's struggle. Winston is a lone leaf in a desert void of others like him, the barriers placed are so great it would not matter how many felt like him, they would all suffer his plight in silence and solitude. ...read more.

Restriction of information is also begging to occur as in the case of "sensitive" biological or chemical research were it could be potentially dangerous. There is also the case of the teaching of Evolution where it is to be taught alongside Creationism, this act heralds the lowering of intellectual standards by allowing demagoguery to forgo science and rationality. Brought to their extremes these types of events lead to the grim world we observed. Orwell, however, does not seem to be a pessimist. The world where ultimately Winston falls and individuality is lost is not eternal. The appendix describing Newspeak appears, to me, to convey a hope that the human spirit will not be extinguished. It is written referring to the Party and Newspeak as past events which have concluded. This is achieved by the usage of perfect tenses, particularly the past, as well as the past passive. This can not be ascertained, though, because it is unstated who wrote the Appendix or for what purpose. It can be gleamed that the Party fell before 2050 since it states Newspeak had not been completely accepted. It is with this hopeful note that Orwell lets us depart from 1984. The world suffered, but it appears to have survived, though it begs the question of whether the suffering was necessary that is what Orwell warns us of if the world is left unchecked. 1 ...read more.

This essay engages at an okay level, looking at how effective the conception of the future is in 1984. This essay has an incredibly critical voice, but I think this is not appropriate at GCSE level. GCSE coursework pieces are ...

This essay engages at an okay level, looking at how effective the conception of the future is in 1984. This essay has an incredibly critical voice, but I think this is not appropriate at GCSE level. GCSE coursework pieces are built upon analysis as the foundation, and then the argument can be formed around this. This piece seems more of a book report, featuring very little analysis but commenting on the plot. I liked the incredibly vast knowledge of contextual features, and these would be beneficial if weaved in with analysis. However, this becomes the substance of this essay, and so will gain little credit for exploration of language, form and structure. This is an essay which reads well, but is a great example of how an examiner would give it a low mark.

The analysis here is poor. There is a great discussion of how the novel can be interpreted, which is fantastic only if the analysis is there before it. This essay shows incredible knowledge, but in an English Literature piece this must be coupled with numerous quotations. Comments such as "Doublethink in action by the free world which could not ever end up like WinstonÃ¢â‚¬â„¢s London" add very little to the argument as you are simply retelling the plot. A discussion of how Orwell uses the language effectively to show the Party's control would be more appropriate. Examiners want to see how critics respond to the text, but this is only one assessment objective and unfortunately there must be a progression from evidence to even warrant these arguments. Many of the comments would be unfounded in an examiners eyes, and once again irrelevant to the task of looking at how Orwell's conception of the future is effective.

This essay lacks any structure as there is no focus on the task. I would've liked to have seen an introduction exploring the techniques, whereas this essay focuses on the content. I liked how this essay underlined every reference to the novel's title. Examiners like to see this, and it contributes to your ability to structure a coherent and proper essay. This is an easy way to get the examiner on your side from the introduction! The style here seems completely wrong. Rhetorical questions and sarcastic comments have no place in a strong argument, and these seem more fitting for an English Language piece. Spelling, punctuation and grammar are fine, and this essay reads fluently - it just needs to focus on the literary techniques.