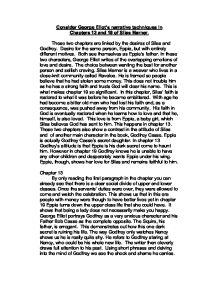 Consider George Eliot's narrative techniques in Chapters 13 and 19 of Silas Marner. These two chapters are linked by the desires of Silas and Godfrey. Desire for the same person, Eppie, but with entirely different motives. Both see themselves as Eppie's father. In these two characters, George Elliot writes of the overlapping emotions of love and desire. The choice between wanting the best for another person and selfish craving. Silas Marner is a weaver who lives in a close-knit community called Raveloe. He is framed so people believe that he had stolen some money. This does not trouble him as he has a strong faith and trusts God will clear his name. This is what makes chapter 19 so significant. In this chapter, Silas' faith is restored to what it was before he became embittered. With age he had become a bitter old man who had lost his faith and, as a consequence, was pushed away from his community. His faith in God is eventually restored when he learns how to love and that he, himself, is also loved. ...read more.

Once again we see Godfrey's weak persona "He was tight lipped and trembling". This strong descriptive language show us his guilt, To shake with emotion is an extreme. Silas' short simple verbal communication such as "It's a woman", shows us that he is not familiar with talking to people, emphasizing his loneliness. Nancy addresses Godfrey to ask him, "what child is it?" Godfrey is weak and replies with, "I don't know", even though he clearly knows the child is his. This reveals how much he values what he could lose socially and how much more he cares for what he possesses rather than claiming his own child. The author now shows us a side of Silas that we have not seen before. Silas is abrupt, impulsive and yet certain about his decision-making. He says "No, no I can't part with it, I can't let it go". He even surprises himself in his great capacity to love. Mrs Kimble says to her neighbour, she is shocked by Silas' care for the childhood Eppie. ...read more.

He and Nancy cannot have children and he needs an heir to all his land and home so now he desparately wants Eppie. Class is also a big issue in the chapter. Godfrey is shown as a villain. He talks down to Silas by calling him Marner, also indicating the social hierarchy. This also gains sympathy for Marner as does his selflessness. He assumes that Eppie would love to go and live with Godfrey and says "I won't stand in your way Eppie". This kindness makes the reader love Silas and also brings out Godfrey's selfishness. Once Silas was a selfish, bitter man and Godfrey felt like he was the lucky one. Now the roles have been reversed. Silas is now able to express his emotions "Heart out of my body" is a simile describing his feelings for Eppie. It shows the complete change in character. Godfrey believes Eppie is better off as a Lady marrying a gentleman. Eppie shows that she can marry someone of a lower class. She does this and is pleased to prove Godfrey wrong. To show their emotions, she uses physical gestures such as Eppie standing next to Silas. ...read more.