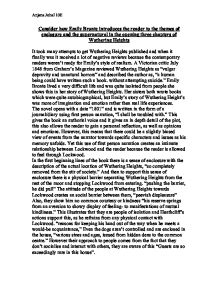 Consider how Emily Bronte introduces the reader to the themes of enclosure and the supernatural in the opening three chapters of Wuthering Heights It took many attempts to get Wuthering Heights published and when it finally was it received a lot of negative reviews because the contemporary readers weren't ready for Emily's style of realism. A Victorian critic July 1848 from Graham's Magazine reviewed Wuthering Heights as "vulgar depravity and unnatural horrors" and described the author as, "a human being could have written such a book. without attempting suicide." Emily Bronte lived a very difficult life and was quite isolated from people she shows this in her story of Wuthering Heights. Her sisters both wrote books which were quite autobiographical, but Emily's story of Wuthering Height's was more of imagination and emotion rather then real life experiences. The novel opens with a date "1801" and is written in the form of a journal/diary using first person narration, "I shall be troubled with." This gives the book an authorial voice and it gives an in depth detail of the plot, this also allows the reader to gain a personal reflection, as well as opinions and emotions. However, this means that there could be a slightly biased view of events from the narrator towards specific characters and issues as his memory unfolds. Yet this use of first person narration creates an intimate relationship between Lockwood and the reader because the reader is allowed to feel through Lockwood. ...read more.

Even the weather she chooses is a form of isolation because snow restricts communication and is another barrier. The social attitudes towards Lockwood are again very cold and create an unnerving atmosphere which isolates them from Lockwood, "she kept her eyes on me in a cool regardless manner," The physical description given of them implies that they look unnatural as well as acting in that way "sentiment they evinced hovered between scorn and a kind of desperation, singularly unnatural". Emily Bronte introduces the idea of supernatural presences in the people by calling Mrs Heathcliff a "beneficent fairy" and then to describe her position there is a use of animal imagery which shows that she isn't respected "good fairy; her mate is dead." "devil, like yer mother afore ye!" She introduces curses in the dialogue changing the tone of the conversation to a supernatural one. "may the Lord deliver us from evil!" this referral to the devil would've scared a lot of people as it was set in the days of the Old Testament and people had a fear of excommunication and were superstitious. At the time Wuthering Heights was written there was a struggle for women, so Emily Bronte subtly makes the women of her story slightly superior by giving Mrs Heathcliff knowledge of performance of the Black Arts, "I've progressed in the Black Art:" this, also grants her with some form of power and authority over others. ...read more.

This is also helped by the use of internal monologue "And what was it that had suggested the tremendous tumult?" Also, the use of hyphens and short sentences make the story tense, which keeps the readers attention, "hastened to add-" At the end of the chapter the reader has a lot of empathy for Lockwood because he is an outsider to Wuthering Heights and its people like the reader. Also, at the beginning he visits Wuthering Heights out of good will and manners, but the more he is involved there the worse things become for him. As he is treated extremely badly, haunted by a ghost and is slowly being drawn into their blasphemous ways. Emily Bronte subtly builds up themes of enclosure and supernatural. She does this through description and uses natural aspects of life to elaborate ideas of enclosure and supernatural. As, she uses weather and physical location a lot to create an image in the reader's mind. Wuthering Heights was the only one of Emily Bronte's books which was published and it is a metaphysical novel because she recognised the problems of her time and used these along side some of her personal experiences and created Wuthering Heights which reflects the social upheaval in England at the time Wuthering Heights was set. I think Emily Bronte effectively introduces the two themes by involving the reader. Also, the description and imagery makes the reader feel as if they're part of the story. Anjana Johal 10E ...read more.