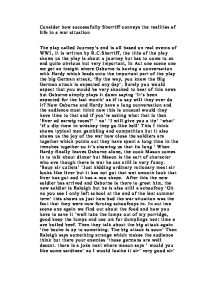 Consider how succsesful sheriff conveys the realities in war situations

The play called Journey’s end is all based on real events of WW1, it is written by R.C.Sherriff, the title of the play shows us the play is about a journey but has to come to an end quite obvious but very important, In Act one scene one we get an insight where Osborne is having a conversation with Hardy which leads onto the important part of the play the big German attack, ‘By the way, you know the Big German attack is expected any day’. Surely you would expect that you would be very shocked to hear of this news but Osborne simply plays it down saying ‘It’s been expected for the last month’ as if to say will they ever do it? Now Osborne and Hardy have a long conversation and the audience must think now this is unusual would they have time to that and if you’re asking what that is then ‘Ever ad earwig races?’ ‘ no’ ‘I will give you a tip’ ‘what’ ‘if u dip them in whiskey they go like hell’ This I think shows typical men gambling and competition but it also shows us the joy of the war how close the soldiers are together which points out they have spent a long time in the trenches together so it’s showing us that its long ‘ When Hardy finally leaves Osborne alone, the cook Mason comes in to talk about dinner but Mason is the sort of character who eve though there is war he can still is very funny. ‘Soup sir cutlets’ ‘Just kidding ordinary rationary meat sir looks like liver but it has not got that wet smooth look that liver has got and it has a noo shape.  After this the new soldier has arrived and Osborne is there to greet him, the new soldier is Raleigh but he is also still a schoolboy ‘Oh no you see I only left school at the end of the last summer term’ this shows us just how bad the war situation was the fact that they were now forcing schoolboys in. In act two scene one again we find out about the food and how you have to save it ‘well take the lumps out of my porridge, good keep the lumps and use um for dumplings next time e ave boiled beef. Then they talk about the big attack again ‘the boche is up to something. The big attack is soon’ Then Raleigh says something strange which makes the audience think but there your enemies ‘those germans are well decent. there is a joke next where mason says ‘ would you like some sardines’ no I would loathe it sir’ very good sir’ this show the audience that mason gives it him as it is the only thing for him to eat and even though he hates it he has no choice but to eat it to built up his strength.  The main focus is Act three scene 3 starts off with great imagery ‘The candles are no longer burning’ the intense darkness of the dug out is softened by the glow of the Very lights in the sky beyond the doorway. There is no sound except for the distant mutter of the guns. ‘Putting the mug on the table’ shows it is a very big dug out as it can have all those things in the dug out, which shows us that they must have some importance. Its dawn ‘Towards dawn’ which sets the scene just another old day. ‘OT tea’ they have tea which shows that they have a jolly morning meaning there is two sides to the war. ‘Trotter is singing a long long trail’ which means its joyful there is still humour in the middle of a war, there is also humour because Stanhope says ‘Has the milkman been yet in French’ ‘The faint whisper of shells hitting the dug out’ It shows the big attack has started, intensifying ‘three more shells hit rapidly’ building it up. ‘Trotter’s hand is quivering’ which shows he is scared out of comfort. ‘Stanhope is still writing in his book’ which means that he isn’t taking much notice he is staying calm ignoring the fact he could probably die any minute. ‘Only corporal Ross hit’ showing us the other side of the war that it is not all peace and happiness. ‘Red glow of dawn’ Sort of angry colour, Then Raleigh is shot in the back. ‘Bit of shells got him in the back, Fraid it’s broke his spine, sir can’t move his legs. This is where Stanhope realizes how much he likes Raleigh, normally Stanhope would get them took down to the big dug out on the right but not Raleigh, ‘Bring him down ere’ which shows Stanhope is saying Raleigh is important my best friend, ‘Raleigh wakes from unconsciousness ‘Hullo------Dennis’ which shows us that he is weak from the attack and he is slowly dying, but Raleigh thinks he is ok ‘Im okay now (he tries to rise) then they are talking about the gun noise ‘Nah it is mostly their guns’ showing that they know the war is half lost and there isn’t a lot of hope left in it at all. We have an awful conversation that is so sad about Raleigh is going to die but Stanhope is trying to keep up the hope and then he dies and it is all so sad. Then Stanhope leaves and a shell hits the dug out causing it to collapse snuffing out the candle leaving Raleigh in darkness, we can only think none of them survived.