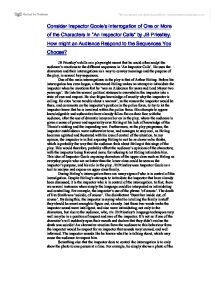 Consider Inspector Goole's Interrogation of One or More of the Characters in &quot;An Inspector Calls&quot; by JB Priestley. How might an Audience Respond to the Sequences You Choose?

JB Priestley's skills as a playwright meant that he could often sculpt the audience's reactions to the different sequences in 'An Inspector Calls'. He uses the characters and their interrogations as a way to convey meanings and the purpose of the play, in several key sequences. One of the main interrogations in the play is that of Arthur Birling. Before his interrogation has even begun, a threatened Birling makes an attempt to intimidate the inspector when he mentions that he 'was an Alderman for years and Lord Mayor two years ago'. He lists his several political statuses to overwhelm the inspector into a state of awe and respect. He also feigns knowledge of exactly why the inspector is calling. He cites 'some trouble about a warrant', as the reason the inspector would be there, and comments on the inspector's position in the police force, to try to let the inspector know that he is involved within the police force. His attempts to appear knowledgeable and authorative have already fallen flat on their face with the audience, after the use of dramatic irony earlier on in the play, where the audience is given a sense of power and superiority over Birling at his lack of knowledge of the Titanic's sinking and the impending war. Furthermore, as the play progresses, the inspector establishes a more authorative tone, and manages to stay cool, as Birling becomes agitated and frustrated with his loss of control of the situation. ...read more.

During Birling's interrogation, there are several points in which Inspector Goole's tone may come across as pretty inappropriate. Even Birling points this out when Goole cheekily remarks 'It might be, you know', in response to Birling's accusation that his business is none of the inspector's business. The inspector's rudeness could really be interpreted in a couple of different ways. You could say the inspector is just being rude and cheeky for the sake of it, because he doesn't seem to have any clear, major reason or intent to backchat Birling. Alternatively, you could suggest that he is in fact trying to establish more authority over Birling. By speaking mysteriously, he is confusing and angering Birling, giving himself a higher status, and also maintaining the audience's interest, by confusing them at the same time! Just by making meaningless, mysterious comments, such as the one just stated, the inspector is showing that he is not scared by Birling, and is in fact in charge of the investigation. He can say whatever he wants, and it almost doesn't matter if Birling doesn't understand him. As already discussed, the inspector's challenging of Birling would almost certainly affect the audience's opinion of the inspector. For example, if an audience member felt negatively towards Birling, the inspector challenging him may make the inspector be seen in a positive light. Alternatively, if the audience saw Birling in a positive light, any challenge by the inspector may make them see the inspector negatively. ...read more.

His use of language by Sheila and other characters depicts the audience's opinion of her, as she changes throughout the course of the play, to surprise the audience. He also uses the context of when the play is set to play on the audience's emotions, getting a reaction out of them and maintaining their interest. The majority of prejudices an audience may have against an upper class family such as the Birlings are almost inapplicable to Sheila during her interrogation, because JB Priestley writes her character so, through the fact that she isn't prejudiced against a lower class person, she accepts responsibility and that she can feel remorse. Sheila's behaviour during her interrogation leads the audience to respond in many ways. Once again, JB Priestley uses dramatic techniques, language and behaviour of the characters throughout these sequences to mould the audience's reactions and keep their interest. Throughout the play, JB Priestley controls and influences the audience's views on the situations and characters in 'An Inspector Calls' in a variety of ways, which are evident in the two key sequences discussed. Audiences are not guaranteed to react in certain ways, however Priestley manages to maintain their interest throughout the play again and again, at the same time as conveying the purpose of the play; the message that the class system can be broken down, as demonstrated in the play. Maybe Priestley wanted to encourage less division between the classes in the future through this play. Consider Inspector Goole's Interrogation of One or More of the Characters in "An Inspector Calls" by JB Priestley. How might an Audience Respond to the Sequences You Choose? ...read more.