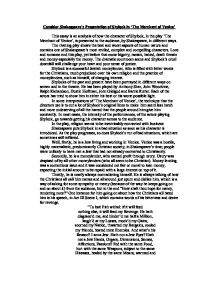 Consider Shakespeare's Presentation of Shylock in 'The Merchant of Venice'.

Consider Shakespeare's Presentation of Shylock in 'The Merchant of Venice' This essay is an analysis of how the character of Shylock, in the play 'The Merchant of Venice', is presented to the audience, by Shakespeare, in different ways. The riveting play shows the best and worst aspects of human nature and contains one of Shakespeare's most reviled, complex and compelling characters. Love and romance end this play, yet before that come bigotry, racism, hatred, death threats and money-especially the money. The dramatic courtroom scene and Shylock's cruel downfall will challenge your heart and your sense of justice. Shylock is a successful Jewish moneylender, who is filled with bitter words for the Christians, much prejudiced over his own religion and the practice of moneylenders, such as himself, of charging interest. Shylocks of the past and present have been portrayed in different ways on screen and in the theatre. He has been played by Anthony Sher, John Woodvine, Ralph Richardson, Dustin Hoffman, John Gielgud and Barrie Rutter. ...read more.

Secondly, he is a moneylender, who earned profit through usury. Usury was despised of by all other moneylenders (who all seem to be Christian). Money lending was a contentious issue and it was considered not fair or moral to loan money, expecting the initial amount to be repaid with a large interest on top of it. Thirdly, he is nearly always contradicting himself. He is always talking of how the Christians all call him names and all around just spurn and dislike him, which is a way of asking for some sympathy or mercy (because of the way he keeps going on and on about it) from the audience, but in the end "How shalt thou hope for mercy, rendering none?" One instance for him going on about how the Christians all hated him is his speech, in Act III Scene I, which contains words of his bitterness and desire for revenge. ...read more.

Why Revenge! The Villainy you teach me I will execute; and it shall go hard, but I will better the Instruction." He did, of course, make a very valid observation in that speech. He was trying to point out that humans are all the same, no matter what they believe in, we are all born, living and are eventually going to die in very much the same ways, so why can't he have his revenge? The desire of revenge is almost inseparable from the sense of wrong and we can hardly help sympathising with the Shylock, hidden beneath his "Jewish gabardine," his madness by repeated, undeserved name calling and labouring to get rid of the obstructions, from opportunities and freedom, heaped upon him and all his tribe by one desperate act of 'lawful' revenge. The ferociousness of the means by which he is to carry out his purpose, turn us against him. Even so, when disappointed of the revenge on which he built his hopes and the way he is punished for his actions, we pity him. ...read more.