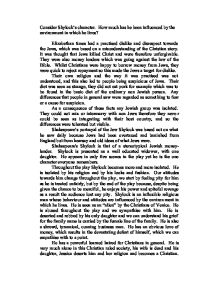 Consider Shylock's character. How much has he been influenced by the environment in which he lives?

Consider Shylock's character. How much has he been influenced by the environment in which he lives? Elizabethan times had a practised dislike and disrespect towards the Jews, which was based on a misunderstanding of the Christian story. It was thought that Jews killed Christ and were therefore unforgivable. They were also money lenders which was going against the law of the Bible. Whilst Christians were happy to borrow money from Jews, they were quick to reject repayment so this made the Jews a target for dislike. Their own religion and the way it was practised was not understood, and this also led to people being suspicious of Jews. Their diet was seen as strange, they did not eat pork for example which was to be found in the basic diet of the ordinary non Jewish person. Any differences that people in general saw were regarded as something to fear or a cause for suspicion. As a consequence of these facts any Jewish group was isolated. They could not mix or intermarry with non Jews therefore they never could be seen as integrating with their host country, and so the differences were tolerated but visible. Shakespeare's portrayal of the Jew Shylock was based not on what he saw daily because Jews had been overtaxed and banished from England but from hearsay and old ideas of what Jews were. ...read more.

She has even exchanged her dead mother's ring for a monkey which is outrageously cruel. Tubal Shylock's Jewish friend goes searching for Jessica but failed to find her. He says that he often heard reports of her and her extravagant spending of Shylock's money, this deeply saddens Shylock, and he feels hurt, humiliated and betrayed by his own daughter, his own flesh and blood. Shylocks strict regime was built of good intentions, but from Jessica's point of view his rules were too restrictive and patronising and lacking in understanding of her needs. We have mixed opinions about Shylock and his daughter Jessica. There are times when I feel sorry for Shylock, times when I am horrified by his bloodthirsty desire for revenge. "I would my daughter were dead at my foot, ad the jewels in her ear: would she were hears'd at my foot, and the ducats in her coffin." Equally there are times when I sympathise with Jessica's tedious life and times when I am shocked by the way she treats her farther. Shylock is totally without humour and rarely shows affection. He has brought Jessica up on his own, this may be why he is so overprotective, he has never had another female in the house to understand Jessica since is wife died. ...read more.

I don't know what is worse, having to give up his religion or be hung. In Shylock's eyes I think he would rather die than become a Christian. Shakespeare wrote plays to make money, and the only way to make money was to please the audience so it was highly un-likely that Shylock could have bettered a Christian, so his defeat had to be more than the loss of his bond; it was in a way a warning at any non Christian who attempted to seek revenge on a Christian. This play can be read as anti-Semitic. Shylock is a pretty rotten character and the fact that he is Jewish is difficult to overlook. However, I think it is important to mention that the "heroes" of this play do not necessarily have to be interpreted as heroes. They are by no means perfect and there are many subtle and some not-so-subtle instances within the text in which their biases against anyone unlike them is illustrated. If one reads the play this way, then Shylock becomes more of a tragic figure rather than an absolutely heartless villain, which would have been the Elizabethan audience's judgment. From a modern audience's point of view Shylock was taught by his superiors and the environment in which he lived which make us more sympathetic and understanding towards him. ...read more.