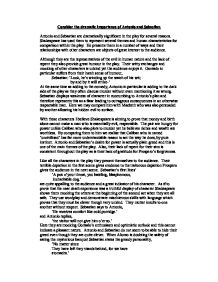 Consider the dramatic importance of Antonio and Sebastian

Consider the dramatic importance of Antonio and Sebastian Antonio and Sebastian are dramatically significant in the play for several reasons. Shakespeare has used them to represent several themes and human characteristics for comparison within the play. He presents them in a number of ways and their relationships with other characters are objects of great interest to the audience. Although they are the representatives of the evil in human nature and the lack of repent they also provide great humour in the play. Their witty exchanges and mocking of other characters is unkind yet the audience enjoys it. Gonzalo in particular suffers from their harsh sense of humour, Sebastian: 'Look, he's winding up the watch of his wit; by and by it will strike-' At the same time as adding to the comedy, Antonio in particular is adding to the dark side of the play as they often discuss murder without even mentioning it as wrong. Sebastian displays weakness of character in succumbing to Antonio's plan and therefore represents this as a flaw leading to outrageous consequences in an otherwise respectable man. ...read more.

They use wordplay and demonstrate mischievous skills with language which proves that they must be clever though very unkind. They mutter insults to one another without respect. Sebastian says to Antonio, 'He receives comfort like cold porridge.' and Antonio replies, 'the visitor will not give him o'er so.' Here they are mocking Gonzalo's enthusiasm and optimistic outlook and this cannot indicate a pleasant nature. Antonio and Sebastian do not seem to be able to hide their greed even though they are quite clever. When Alonso is doubting the safety of eating the mysterious banquet Sebastian states his greedy personality, 'No matter since They have left they viands behind, for we have stomachs.' Although Sebastian is obviously evil I believe Shakespeare wishes us to believe that his evil has been triggered by another and would not have come out naturally. He even says, 'I am standing water' meaning that unless pushed he will remain still yet he may be swept easily along by the current which is Antonio. In reply Antonio says he will, 'teach him to flow' and therefore we know that he is the driving force of this plot. ...read more.

Antonio has no conscience. Later they are both forgiven by Prospero showing greatness of character on his part but they are not grateful. Sebastian is the King Alonso's brother. He along with Antonio consistently mocks his superior in a surprisingly casual way. The leeway that being brother of the king gives Sebastian would not have been great in Shakespeare's time as the monarch was used to very careful treatment from all. However Alonso does not seem to take offence from these two which shows his weakness of character or perhaps even plain stupidity. They were invited to his daughter's wedding in Tunis so they must be on fairly good terms with the king yet even on the return journey they mock him by nastily blaming him for the loss of his daughter in his rate. Sebastian says, 'Sir, you may thank yourself for this great loss,' This is very unkind to an already desperately upset man. Antonio and Sebastian's nastiness to others does not end here. They continually mock others particularly Gonzalo and Adrian. In conclusion, Antonio and Sebastian are both evil men who contribute to the play in terms of plot direction, humour and in underlying darkness. Their characters are colourful and interesting, representing several flaws in human character and some of the plays themes. ...read more.