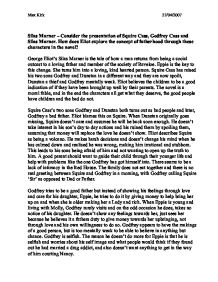 Consider the presentation of Squire Cass, Godfrey Cass and Silas Marner - How does Eliot explore the concept of fatherhood through these characters in the novel?

Silas Marner - Consider the presentation of Squire Cass, Godfrey Cass and Silas Marner. How does Eliot explore the concept of fatherhood through these characters in the novel? George Eliot's Silas Marner is the tale of how a man returns from being a social outcast to a loving father and member of the society of Raveloe. Eppie is the key to this change. She turns him into a loving, kind hearted person. Squire Cass has raised his two sons Godfrey and Dunstan in a different way and they are now spoilt, Dunstan a thief and Godfrey mentally weak. Eliot believes the children to be a good indication of if they have been brought up well by their parents. The novel is a moral fable, and in the end the characters all get what they deserve, the good people have children and the bad do not. Squire Cass's two sons Godfrey and Dunstan both turns out as bad people and later, Godfrey a bad father. ...read more.

Godfrey is selfish. The reason he doesn't do more for Eppie is that he is selfish and worries about his self image and what people would think if they found out he had married a drug addict, and also doesn't want anything to get in the way of him courting Nancy. Silas Marner is Eliot's perfect model of a father. He is loving and caring and doesn't believe in punishment. Due to Silas's past experiences in Lantern Yard, for the first 15 years he finds it difficult to direct his emotion to anywhere but his money. Because of the way he looked and excluded himself, no one in Raveloe became friendly with Silas when he arrived and thought of him as a miser 'spinning like an insect' at his loom in his cottage alone. Once his money is discovered missing, Silas looses an object to direct his emotion towards. This is eventually replaced with Eppie who grows up to be a fine young woman. ...read more.

Silas is not selfish, but would hate to see Eppie leave, as she is the love of his life saying 'I won't stand in your way'. Eppie is grateful for everything Silas has done for her and wouldn't leave him as he wouldn't like to see her go, shown in the quotations 'He's took care of me and loved me from the first, and I'll cleave to him as long as he lives, and nobody shall ever come between him and me'. For the duration of the meeting with Nancy and Godfrey, Eppie remains close to Silas and they are normally holding hands, this is another example of how close the pair are. Eliot's ideal fathering role is Silas Marner. He loves Eppie and treats her well, letting her make decisions on her own to lead her own life. Godfrey means to be a good father but he is mentally weak and doesn't show his love thorough emotion but by money, which isn't a sign of good parenting. Squire spoilt Dunstan and Godfrey which made them expect people to do everything for them in life and also greedy. Max Kirk 27/04/2007 ...read more.