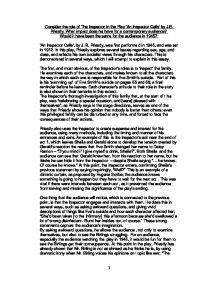 Consider the role of The Inspector in the Play 'An Inspector Calls' by J.B. Priestly.

Consider the role of The Inspector in the Play 'An Inspector Calls' by J.B. Priestly. What impact does he have for a contemporary audience? Would it have been the same for the audience in 1945? 'An Inspector Calls', by J. B. Priestly, was first performed in 1945, and was set in 1912. In this play, Priestly explores several issues regarding sex, age, and class, and reflects his own socialist views through his characters. This is demonstrated in several ways, which I will attempt to explain in this essay. The first, and most obvious, of the Inspector's roles is to 'inspect' the family. He examines each of the characters, and makes known to all the characters the way in which each one is responsible for Eva Smith's suicide. Part of this is his 'summing up' of Eva Smith's suicide on pages 55 and 56; a final reminder before he leaves. Each character's attitude to their role in the story is also shown in their remarks in this extract. The Inspector's thorough investigation of this family that, at the start of the play, was "celebrating a special occasion, and [were] pleased with themselves", as Priestly says in the stage directions, serves as one of the ways that Priestly shows his opinion that nobody is better than others; even this privileged family can be disturbed at any time, and forced to face the consequences of their actions. Priestly also uses the Inspector to create suspense and interest for the audience, using many methods, including the timing and manner of his entrances and exits. ...read more.

Settle it afterwards." He then continues asking Eric questions, ending any argument and reinforcing Priestly's point that you cannot get away from your responsibilities. Another way he guides the plot is by manipulating the characters so they say what he needs them to say to make his next argument. An example of this is the following quote. Gerald (to Sheila): Why should you [stay]? It's bound to be unpleasant and disturbing. Inspector: And you think young women ought to be protected against unpleasant and disturbing things? Gerald: If possible - yes. Inspector: Well, we know one young woman who wasn't, don't we. In the above segment, the Inspector asks a question which is shaped to give him the response he needs, so that he can go on to say "Well we know one woman who wasn't...", thus getting the conversation back onto the subject of Eva's death and the causes of it. To give the messages delivered by the Inspector authority, Priestly makes him a very mysterious character. Firstly, there is his name; Goole sounds like 'ghoul', and Inspector reminds us of the word 'spectre', both of which suggest that the Inspector is an ethereal being. Enforcing this theory is his remark "We often do [have an impression] on the young ones", which makes us wonder what 'we' he is part of - perhaps the undead, or perhaps he is an angel of some sort. Another theory, which is that of the older Birlings, is that he is just somebody playing a trick on them and not a police officer at all - "That man definitely wasn't a police inspector at all... ...read more.

In comparison, immediately after the Second World War there was a great desire for social change; perhaps Priestly was implying that men had learnt their lesson, finally, and was highlighting it so that the audience, and anyone else who got his message, would not forget and revert to their old ways. His illustration of the Birling's attitudes and lifestyle was a 'typical' representation of how upper class attitudes affected working class people; for example, Mrs Birling said of Eva, "as if a girl of that sort would ever refuse money!" and gave it as a reason for not helping Eva. It should also be noted here that this play was performed just a few years before the welfare state was implemented, which could mean that plays like this were the catalyst for that change. In conclusion, the main role of the Inspector in 'An Inspector Calls' is as a device through which Priestly can reveal his own socialist views, and prove them. The Inspector is also a partly amusing, partly mysterious character who keeps the audience entertained. He has this effect on any audience, whether in 1945 or contemporary, and Priestly effectively manages to entertain the audience whilst delivering his message by using a variety of different devices, showing that he was a skilled playwright. The Inspector retains his air of mystery throughout the play, and the ending further enforces it, as the Birlings are left wondering if he was real at all. Therefore, for the most part, the Inspector is there to sustain the audience's interest and to deliver Priestly's message to them in a memorable way. ?? ?? ?? ?? 1 ...read more.