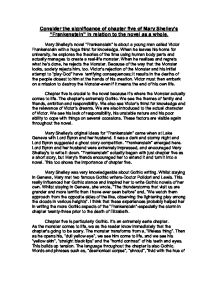 Consider the significance of chapter five of Mary Shelley's &quot;Frankenstein&quot; in relation to the novel as a whole.

Consider the significance of chapter five of Mary Shelley's "Frankenstein" in relation to the novel as a whole. Mary Shelley's novel "Frankenstein" is about a young man called Victor Frankenstein with a huge thirst for knowledge. When he leaves his home for university, he explores the theories of the time using human body parts and actually manages to create a real-life monster. When he realises and regrets what he's done, he rejects the Monster. Because of the way that the Monster looks, society rejects him, too. Victor's rejection of the Monster and his initial attempt to "play God" have terrifying consequences; it results in the deaths of the people closest to him at the hands of his creation. Victor must then embark on a mission to destroy the Monster-even if it means the end of his own life. Chapter five is crucial to the novel because it's where the Monster actually comes to life. The chapter's extremely Gothic. We see the themes of family and friends, ambition and responsibility. We also see Victor's thirst for knowledge and the relevance of Victor's dreams. We are also introduced to the actual character of Victor. We see his lack of responsibility, his unstable nature and his poor ability to cope with things on several occasions. These factors are visible again throughout the novel. Mary Shelley's original ideas for "Frankenstein" came when at Lake Geneva with Lord Byron and her husband. It was a dark and stormy night and Lord Byron suggested a ghost story competition. "Frankenstein" emerged here. Lord Byron and her husband were extremely impressed, and encouraged Mary Shelley's to write it down. "Frankenstein" actually began with just chapter five as a short story, but Mary's friends encouraged her to extend it and turn it into a novel. This too shows the importance of chapter five. Mary Shelley was very knowledgeable about Gothic writing. Whilst staying in Geneva, Mary met two famous Gothic writers-Doctor Polidori and Lewis. ...read more.

Agatha faints and Safie rushes out of the cottage. Felix then pushes the Monster to the ground and begins beating him vigorously with a stick. This is all because of the way he looks; the Monster hadn't even spoken. This reveals that at the start of the 19th century, people weren't supposed to be different. The general public was scared of difference and what they weren't used to. If somebody was different, they were instantly rejected and pushed aside. To be accepted, you had to fit in. The monster's character is explored in this chapter. We see how the Monster first approaches Victor. When he does, his eyes were fixed on Victor, a grin, "wrinkled his cheeks", he attempted to speak and he stretched out his hand. Victor assumes that the Monster does this to detain him. We as the reader assume this, too, because of the frightening way that Victor describes him. As the novel goes on, though, we realise that this may not be the case. His attempted words could have been a greeting. His grin could have been a friendly grin as opposed to an evil one. His outstretched arm could have been the Monster stretching out for Victor to attempt to help him, or even for Victor to shake his hand. We only feel discontent for the Monster (especially at the beginning of the novel) though, because of the way that Victor describes him. For one, Victor describes him as, "the Monster" instead of naming him. This immediately puts across a negative image of him. Throughout the novel, Victor continues to describe the monster in a menacing way: in chapter five it's, "daemonical corpse"; in chapter ten he's described as, "superhuman"; and in chapter six we see Victor's view on the Monster's creation described as, "the fatal night, the end of my labours, the beginning of my misfortunes". This gives us as the reader an incredibly negative view of the Monster. ...read more.

People had begun to realise the potential of electricity. In 1802, scientist Galvani ran a current through a frog's leg and made it move, and in 1803 scientist Aldani attached a battery to a corpse and claimed that it had moved. This caused some scientists to believe that eventually, with the power of electricity, man could be able to live forever. I think that Mary Shelley is trying to get this point across in"Frankenstein". She was trying to say that humans should not attempt to "play God"-who is, after all, the only thing that has the right to give or take life. I think that she is trying to say that as soon as man begins to give or take life, there could be disastrous consequences and it therefore should not be experimented with. Mary Shelley is also considered one of the first feminists. By putting across the point that only God can create life, she may also be trying to say that only women can give life. Men don't have that ability, and should not try to change that. Whilst she was writing "Frankenstein", Mary Shelley was reading a book called Emile by Jean-Jacques Rousseau. He argued that when they were born, all men are harmless but it is in fact society that makes them evil. It was as a result of Victor's initial rejection of the Monster in chapter five and other peoples' rejection of him throughout the rest of the novel that the Monster turned evil-and that was all because of his appearance. I think that Mary Shelley was trying to say how wrong this was. Victor himself was extremely prejudiced towards the Monster in his narrative. Right from after his creation, Victor referred to the Monster as "the Monster" and "daemon" as opposed to even just giving it a name. He rejected it because of the way it looked, and the rest of society went on to do the same. It was this prejudice that began in chapter five that Mary Shelley was trying to say was wrong throughout the rest of the novel. ?? ?? ?? ?? ...read more.