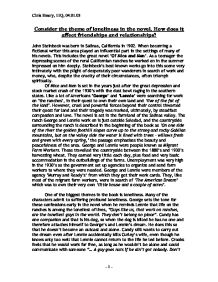 Consider the theme of loneliness in the novel. How does it affect friendships and relationships?

Consider the theme of loneliness in the novel. How does it affect friendships and relationships? John Steinbeck was born in Salinas, California in 1902. When becoming a fictional writer this area played an influential part in the settings of many of his novels. This includes the great novel 'Of Mice and Men'. As a teenager the depressing scenes of the rural Californian ranches he worked on in the summer impressed on him deeply. Steinbeck's best-known works go into this scene very intimately with the plight of desperately poor wanderers in search of work and money, who, despite the cruelty of their circumstances, often triumph spiritually. Of Mice and Men is set in the years just after the great depression and stock market crash of the 1930's with the dust bowl raging in the southern states. Like a lot of Americans 'George' and 'Lennie' were searching for work on 'the ranches', in their quest to own their own land and 'live of the fat of the land'. However, cruel and powerful forces beyond their control thwarted their quest for land and their tragedy was marked, ultimately, by steadfast compassion and love. The novel is set in the farmland of the Salinas valley. The ranch George and Lennie work on is just outside Soledad, and the countryside surrounding the ranch is described in the beginning of the book as 'On one side of the river the golden foothill slopes curve up to the strong and rocky Gabilan mountains, but on the valley side the water is lined with trees - willows fresh and green with every spring,' the passage emphasises the beauty and peacefulness of the area. George and Lennie were people known as Migrant Farm Workers. These travelled the countryside between the 1880's and 1930's harvesting wheat. They earned very little each day, plus food and very basic accommodation in the outbuildings of the farms. ...read more.

At this point Candy reveals that he has quite a bit of money saved up which he could invest into the farm if he was allowed to. He asks George if he can come with them. After some careful thinking George agrees. Candy explains to George why he needs a place like theirs: "You seen what they done to my dog tonight? They says he wasn't no good to himself nor nobody else. When they can me here I wisht somebody'd shoot me. But they won't do nothing like that. I won't have no place to go, an' I can't get no more jobs". In chapter 4 Candy is searching for Lennie one night while all the others have gone into town. He finds him in Crooks's room and he is invited in to join them. He and Lennie start a conversation about the farm. Candy is so excited that he can't stop himself telling others. When Curley's wife tries to strike up a conversation with them, Candy reveals to her the dream of owning a farm. This only annoys George. When he returns, he tells them to leave immediately. In Chapter 5 the dream goes sour when Candy reveals the dead body of Curley's wife. He goes and gets George and returns to the body with him. George knows it was Lennie, as he had always feared this would happen. Candy cautiously asks George if they can still get their farm. George is silent, then says: "I think I knowed from the very first. I think I knowed we'd never do her. He usta like to hear about it so much I got to thinking maybe we would." All their dreams disappeared the moment Lennie killed Curley's wife. George's only hope now is that maybe the other workers won't want to hurt Lennie. When George leaves, Candy speaks angrily to the corpse and 'his eyes are blinded with tears'. ...read more.

Therefore, this idea of having such power over their lives is a strong motivation. The connection between the characters dreams and loneliness is very strong. All Curley's wife wanted to be was an actress, she missed her chance and married, as a result she became very lonely. Crooks being Negro was always condemned to a life of loneliness but he still had a dream of what his life used to be like compared to the reality of what it was today. And Candy loosing his only true friend and companion; his dog meant that if he didn't link himself to a dream he would lead a life of loneliness. As it happened his dream like everyone else's was shattered by one fatal accident. When George tells Lennie to look across the river and imagine their farm, he lets Lennie die with the hope that they will attain their dream, and attain it soon. George, who must kill Lennie, is not allowed such comfort. He must go on living knowing the failure of their dream, as well as the sadness and guiltiness of knowing that he killed his best and only true friend. George lets Lennie die with the image of their farm in his mind and in a state of complete mental happiness and calmness. But George himself must continue through life knowing that they will never reach it; "I think I knowed we'd never do her. He usta like to hear about it so much I got to thinking maybe we would." The other men who come on the scene only see the half-wit who killed a woman and deserved to die. Only Slim understands George's tragic loss. Carlson and Curley watch Slim lead George away from the riverbank; their complete state of puzzlement is rooted more in ignorance than in heartlessness. Carlson and Curley represent the harsh conditions of a distinctly real world, a world in which the weak will always be vanquished by the strong and in which the rare, delicate bond between friends is not appropriately mourned because it is not understood. Chris Emery, 11Q, 04.01.03 - 1 - ...read more.