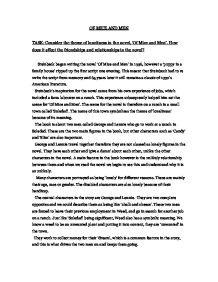 Consider the theme of loneliness in the novel, 'Of Mice and Men'. How does it affect the friendships and relationships in the novel?

OF MICE AND MEN TASK: Consider the theme of loneliness in the novel, 'Of Mice and Men'. How does it affect the friendships and relationships in the novel? Steinbeck began writing the novel 'Of Mice and Men' in 1936, however a 'puppy in a family house' ripped up the first script one evening. This meant that Steinbeck had to re write the script from memory and 65 years later it still remains a classic of 1930's American literature. Steinbeck's inspiration for the novel came from his own experience of jobs, which included a farm labourer on a ranch. This experience subsequently helped him set the scene for 'Of Mice and Men'. The scene for the novel is therefore on a ranch in a small town called 'Soledad'. The name of this town symbolises the theme of 'loneliness' because of its meaning. The book is about two men called George and Lennie who go to work at a ranch in Soledad. These are the two main figures in the book, but other characters such as 'Candy' and 'Slim' are also important. George and Lennie travel together therefore they are not classed as lonely figures in the novel. They have each other and 'give a damn' about each other, unlike the other characters in the novel. A main feature in the book however is the unlikely relationship between them and when we read the novel we begin to see this and understand why it is so unlikely. Many characters are portrayed as being 'lonely' for different reasons. These are mainly their age, race or gender. The disabled characters are also lonely because of their handicap. The central characters in the story are George and Lennie. They are two complete opposites and we could describe them as being like 'chalk and cheese'. These two men are forced to leave their previous employment in Weed, and go in search for another job on a ranch. ...read more.

He is so desperate to stop himself being put on the county that he offers them everything. Steinbeck also cleverly uses the shooting of Candy's dog to symbolise what will happen at the end of the book. The foreshadowing device will later on show what George must do to Lennie. 'Awright - take 'im'. Candy later on feels annoyed that he didn't shoot the dog himself and we then know why George must do it to Lennie and no one else. The next character we come across is Crooks. He is a very important character in the novel and Steinbeck uses his skin colour to reveal the racism of the 1930's. There were no black rights at this time and Steinbeck clearly demonstrates how a 'nigger' is treated. Crooks is treated differently to the rest of the characters because of the colour of his skin. He explains to Lennie that 'this is just a nigger talkin; a busted - back nigger. So it don't mean nothing.' This quote shows us that it doesn't matter what he says because of his skin colour. It also helps us understand that he has a low self-esteem and is reduced to nothing; he means nothing to anybody. Crooks is a very solitary character and has his own 'stable' next to the horses. This shows he is thought of as nothing because he is put next to the animals and not with the other people. He is forced to spend his spare time reading 'battered' magazines and 'a few dirty books' to keep himself entertained, because he is not allowed into the 'bunk house and play rummy'. He explains that it is almost like an illness when 'a guy gets too lonely an' he gets sick.' Another quote in the story which shows he is treated like the horses is that in his room there is 'a range of medicine bottles, both for himself and the horses.' ...read more.

From doing this essay and focusing on the main characters, I can see that loneliness is the main topic in the novel and the characters are lonely for certain reasons. Crooks is lonely because of his race, Curley's wife because of her sex, and Candy because of his age and disability. Candy and Lennie are portrayed as lonely because of their mental and physical disabilities. Another main reason for people being lonely in that time was the reason that people didn't care for each other and it seemed normal that everyone was lonely. They didn't care for each other mainly because at this time most men, travelling alone, migrated from ranch to ranch on short term, poorly paid contracts, therefore the workers were not very often at ranches very long. Another reason is because of the economic depression in 1929 and men were out for themselves and no one else. Although George has Lennie, he is still considered a lonely figure because of Lennie's mental disability; therefore he is not able to hold a proper conversation with him. Candy's only 'friend' is the dog and because of loneliness the other characters don't understand why the animal means so much to him. Crooks is forced to live next to the stables, shutting him off from the rest of the ranch workers and Curley's wife shows that she has no attention and is lonely because she goes round the men looking for attention off them. Coincidentally, two of the lonely figures, Lennie and Curley's wife, end up dead, and it is the loneliness that's brings them together in the barn. Over all I think Steinbeck is successful in his portrayal of loneliness, loyalty and friendship and the hostile economic environment throughout the novel. He uses different aspects of the characters lives to indicate that for this reason they are treated differently. Steinbeck writes well and we sympathise with certain characters at different parts in the story. The way Steinbeck uses similes, rhetorical questions and symbolism helps us relate to the characters, consequently making us care about them. ...read more.