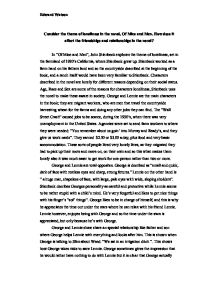 Consider the theme of loneliness in the novel, Of Mice and Men. How dose it affect the friendships and relationships in the novel?

Consider the theme of loneliness in the novel, Of Mice and Men. How dose it affect the friendships and relationships in the novel? In "Of Mice and Men", John Stienbeck explores the theme of loneliness, set in the farmland of 1930's California, where Stienbeck grew up. Stienbeck worked as a farm hand on his fathers land and so the countryside described at the beginning of the book, and a ranch itself would have been very familiar to Stienbeck. Characters described in the novel are lonely for different reasons depending on their social status. Age, Race and Sex are some of the reasons for characters loneliness, Stienbeck uses the novel to make these aware in society. George and Lennie are the main characters in the book; they are migrant workers, who are men that travel the countryside harvesting wheat for the farms and doing any other jobs they can find. The "Wall Street Crash" caused jobs to be scarce, during the 1930's, when there was very unemployment in the United States. Agencies were set to send farm workers to where they were needed: "You remember about us goin' into Murray and Ready's, and they give us work cards". They earned $2.50 or $3.00 a day, plus food and very basic accommodation. These sorts of people lived very lonely lives, as they migrated they had to pick up their roots and move on, on their own and so this what makes them lonely also it was much easer to get work for one-person rather than two or more. ...read more.

He is not much use for anything and he knows this. Candy fears when he is to old to do anything that he will just get 'canned', which is why he buys into the friendship with George and Lennie. The only thing that motivates Candy is his old dog "gray of muzzle and with pale, blind old eyes", which unfortunately is killed after Carlson decides not to put up with the smell and Candy is ganged up on to get rid of him; "If you want me to, I'll put the old devil out of his misery right now". The 'American Dream' is shared by George and Lennie who dream of the "little house and a couple of acres". For American society as a whole, the dream ended with the Wall Street Crash of 1929. Cinema is the last American dream for many. Curley's wife is one: "Could have been in the movies, an' had nice clothes". Steinbeck describes Crooks with a "lean face lined with deep black wrinkles, and he had thin , pale-tightened lips". Crooks lives in "a little shed that leaned off the wall of the barn". Crooks reserves the only right he has, "You got no right to come in my room". However, when Lennie goes into Crooks' room he relaxes and enjoys the company. Crooks' job is a "Stable buck", which means he tends the horses. ...read more.

She uses her sexual image as a woman to get the mens' attention just so she can talk to them. However, this does not usually work as most of the men are often to scared to talk to her. Although Curley's wife looks and acts like a"tart" she is just craving attention and this is the only way she knows how to get it. At the end of the novel, her lonliness causes her to converse with Lennie in the barn where the irony is that when she finally gets someone to talk to, it leads to her death! Curley's wife is the victim of sexism, she is lonely because she has no one to talk to as people are afraid to talk to her. Lennie suffers from discrimination because of his learning disability. The fact that they are both unequal brings them together in the barn. Lennie is there to bury his puppy and Curley's wife is there to have a conversation. However in the end, Lennie's disability causes her death: "don't you go yellin" "he shook her and her body flopped like a fish". The incident in the barn affects George, Lennie and Candy's relation because Lennie has finally gone too far. When George knows he has to kill Lennie, then the dream dies with Lennie leaving George and Candy lonely. "Guys like us, that work on ranches, are the loneliest guys in the world." In conclusion Stienbeck makes aware a serious problem leading to loneliness in 1930's California through his novel "Of Mice and Men". Discrimination Edward Watson ...read more.

This is a good example of the work expected at this level. The candidate describes their points in details and manages to add personnel opinions. The candidate answers the set question well, they have also included information from independent research. ...

This is a good example of the work expected at this level. The candidate describes their points in details and manages to add personnel opinions. The candidate answers the set question well, they have also included information from independent research. This shows an interest in the novel, and makes the essay more appealing to the reader. I like how s/he uses the introduction to describe life in America at the time this novel was written, it helps the reader to understand the emotions of the characters and relates well to the set question. The candidate goes into a suitable depth and analysis when discussing the characters feelings and the reasons behind their actions.

The candidate uses quotations to describe the charters physical appearance and successfully selects appropriate quotations to analyse the characters behaviour and emotions. S/he includes personal opinions to highlight relationships between the characters, especially between George and Lennie, in which they describe how George really feels and how his actions towards Lennie show his love and kindness. Unfortunately the candidate fails to discuss the use of linguistic techniques such as onomatopoeia, metaphors and similes, this is necessary to achieve a higher grade. For example in chapter one, Lennie is described as animal like, he lumbers along like a bear and drinks from the pool like a horse. These are strong animals and this use of imagery and similes refer to LennieÃ¢â‚¬â„¢s physical strength but it also suggests that Lennie has the intelligence of an animal, a simplified intelligence. In addition the conclusion is too short, it should summarise your key points, answer the initial question and include your own opinions and reasonings.

The essay is fluent and generally it flows well, also there is no real issue with spelling and grammar. The candidate uses an acceptable range of vocabulary and s/he uses punctuation appropriately. Overall this is reasonably good example of the quality of work expected at this level.