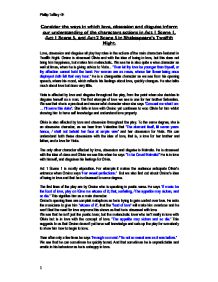 Consider the ways in which love, obsession and disguise inform our understanding of the characters actions in Act 1 Scene 1, Act 1 Scene 5, and Act 2 Scene 5 in Shakespeare's Twelfth Night.

Consider the ways in which love, obsession and disguise inform our understanding of the characters actions in Act 1 Scene 1, Act 1 Scene 5, and Act 2 Scene 5 in Shakespeare's Twelfth Night. Love, obsession and disguise all play key roles in the actions of the main characters featured in Twelfth Night. Orsino is obsessed Olivia and with the idea of being in love, but this does not bring him happiness, but makes him melancholic. We see he is also quite a wise character as well at times, when he is giving advice to Viola. . "Then let thy love be younger than thyself, or thy affection cannot hold the bent: For woman are as roses, whose fair flower being once displayed doth fall that very hour." He is a changeable character as we see from his opening speech, where his mood, which reflects his feelings about love, quickly changes. He also talks much about love but does very little. Viola is affected by love and disguise throughout the play, from the point when she decides to disguise herself as a man. The first example of love we see is one for her brother Sebastian. We see that she is a practical and resourceful character when she says "Conceal me what I am ... I'll serve this duke". She falls in love with Orsino yet continues to woo Olivia for him whilst showing him to have self knowledge and understand love properly. Olivia is also affected by love and obsession throughout the play. To the same degree, she is an obsessive character, as we hear from Valentine that "The element itself, till seven years hence, / shall not behold her face at ample view" and her obsession for Viola. We can understand both these obsessions with the idea of love, that is, a love for her brother and father, and a love for Viola. ...read more.

I think that Shakespeare is trying to imply that love is so close to madness that Orsino or Viola could easily become insane where one lover becomes a killer and the other a sacrificed lamb. Act 1 Scene 5 is used largely also exposition and exploration of the relationship between Olivia and Viola who is in disguise as a man. As it sets up the next scene when Viola and Olivia meet. We also see that Olivia and Viola both speak in verse as this makes them high class and noble. We see that Olivia's obsession for mourning for seven years is shown to be a waste of time by feste who says to Olivia "The more fool, Madonna, to mourn for your brother's soul, being in heaven." Later on in the scene Olivia realises that what feste has told her is right. So she breaks her vows to not love anybody. Viola arrives and after being questioned from Olivia she tells her that "Above my fortunes, yet my state is well: I am a gentleman." Since Olivia says afterwards to herself and the audience that "Even so quickly can one catch the plague?" it tells us that she is in love with Cesario because she is using "the plague" as a metaphor for love. We also see from this that she couldn't love Cesario if he wasn't a gentleman. This shows us that class plays an important role in who she can love. Olivia disguises her real feelings for Cesario, as she tells Malvolio that he was a "peevish messenger" and doesn't say to him, that she has fallen in love. This is self deception. She also brings Cesario back under false pretences. But as Viola knows the concept of love, she quickly realises that Olivia has fallen in love with her. We know this because she says in a speech "She loves me," Before Orsino and Olivia under stand love they use images of disease, illness, or death to describe love. ...read more.

This shows that because Malvolio is the only person who hasn't got self knowledge, so is excluded from the general happiness that the other characters have. It seems like Olivia is the only person who seems to care about Malvolio when she says "He hath been most notoriously abused." This is because Olivia is a compassionate woman and has been taught this by Viola. It seems as though obsession, self love, disguise, and not having self knowledge seem to be incompatible with love. Because Orsino had obsession, and didn't have self knowledge so couldn't love Viola. Olivia had obsession, disguise, self deception, and not having self knowledge stand in the way of loving Cesario or Sebastian. And Viola had disguise which got in the way of her loving Orsino. At the end of the play, Orsino isn't obsessed with being in love any more, and has self knowledge and love and so marries Viola. Olivia isn't self deceitful anymore, doesn't disguise her feelings, knows how to love and has self knowledge so marries Sebastian. And Viola has got rid of her disguise so marries Orsino. Malvolio is the only person who didn't learn anything because he began with self love, self obsession, disguising his feelings, and not having self knowledge and stayed that way. Apart from feste he was the only character who didn't get married. And he is the only character who wasn't happy at the end and wanted revenge. I think Shakespeare wrote this play to show us that in order to love, you have to be open and free of obsession and disguise. I think he did this by using Viola as the character that has self knowledge and to teach this to the characters Orsino and Olivia. Shakespeare used this to show the audience that if you are free of obsession and disguise and have self knowledge and know the concept of love, you will be happy, but if you don't then you could turn out to be like Malvolio; bitter and sour. Phillip Taffley 4E 1 ...read more.