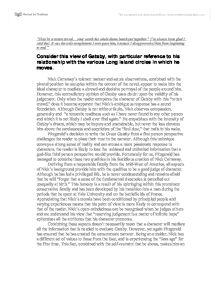 Consider this view of Gatsby, with particular reference to his relationship with the various Long Island circles in which he moves.

"They're a rotten crowd... your worth the whole damn bunch put together." I've always been glad I said that. It was the only complement I ever gave him, because I disapproved of him from beginning to end." Consider this view of Gatsby, with particular reference to his relationship with the various Long Island circles in which he moves. Nick Carraway's tolerant manner and astute observations, combined with the pivotal position he occupies within the context of the novel, appear to make him the ideal character to mediate a shrewd and decisive portrayal of the people around him. However, this contradictory opinion of Gatsby casts doubt upon the validity of his judgement. Only when the reader compares the character of Gatsby with this "rotten crowd," does it become apparent that Nick's ambiguous response has a sound foundation. Although Gatsby is not without faults, Nick observes compassion, generosity and "a romantic readiness such as I have never found in any other person and which it is not likely I shall ever find again." He empathises with the intensity of Gatsby's dream, which may be impure and unattainable, but never the less elevates him above the carelessness and scepticism of the "foul dust," that trails in his wake. Fitzgerald's decision to write the Great Gatsby from a first person perspective challenges the reader to place their trust in the narrator. ...read more.

Throughout the novel, Nick witnesses many sides to Gatsby's character. He sees him in the greatest crisis of his life, while he is awaiting Daisy's arrival with a "strained counterfeit of perfect ease" and looking "as pale as death," as well as in the most satisfying moment of his life, when, his dream begins to look like reality and he is "consumed with wonder." These images of Gatsby are far removed from the one of him "standing alone on the marble stairs" almost dispassionately, while "looking from one group to another" as if he was incapable of showing emotion. But this is what elevates Nick above the average person at the party. He is not prepared to accept the "romantic speculation" about Gatsby being a German spy until he has found reliable evidence to back this up. This is one of the many reasons why people such as Jay Gatsby and Jordan Baker place their trust in Nick and more importantly is the chief reason why any discerning reader should do exactly the same. When analysing the novel in greater detail, it is easy to see why Nick "disapproves" of Gatsby "from beginning to end." Everything that he represents is in direct contrast to Nick and his traits of character. Where Gatsby is vulgar, immoral and insincere Nick remains dignified, pious and honest, giving him stronger reasons to criticise Gatsby and the "American dream" that has made him. ...read more.

The reader shares this view, and although he proves this to be his true background, there is always a lingering question over the sincerity of Gatsby's words. With a lack of faith in his honesty and a strong disapproval of his lifestyle, the question of how great Gatsby is becomes inevitable. It is important to remember that Nick voices the same concerns over Gatsby's personality and only complements him within the context of the novel. The fact that he is "worth the whole damn bunch put together" implies that the other characters really must be a "rotten crowd," because as Nick says, he already disapproves of Gatsby. This suggests that they are not only much worse then Gatsby, but there is a redeeming feature to his character that Nick relates to and approves of. Tom Buchanan, more then any one else within the novel, represents this "foul dust" that trails in Gatsby's wake. He is portrayed as a completely egotistical character, who shows no compassion to those around him and whose actions are solely determined by his selfish needs. Having a mistress may show a complete lack of respect for his wife, but satisfies his lust, and breaking Myrtle's nose may be brutal, but prevents her from betraying his commands. In both of these cases, Tom has illustrated that he doesn't give a second thought to the pain he may cause others, and will use any means available to achieve his desires. ...read more.