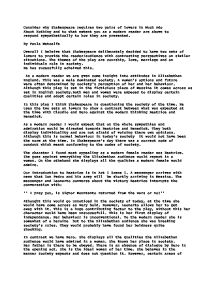 Consider why Shakespeare requires two pairs of lovers in Much Ado About Nothing and to what extent you as a modern reader are above to respond sympathetically to how they are presented.

Consider why Shakespeare requires two pairs of lovers in Much Ado About Nothing and to what extent you as a modern reader are above to respond sympathetically to how they are presented. By Paula Metcalfe Overall I beleive that Shakespeare deliberately decided to have two sets of lovers to provide the reader/audience with contrasting perspectives on similar situations. The themes of the play are courship, love, marriage and an individuals role in society. He has sucessfully acheived this. As a modern reader we are gven some insight into attitudes in Elizabethan England. This was a male dominated society. A woman's options and future were often determined by society's perception of her and her behaviour. Although this play is set in the ficticious place of Messina it comes across as set in English society.Both men and women were expeced to display certain qualities and adopt certain roles in society. In this play I think Shakespeare is questioning the society of the time. He uses the two sets on lovers to show a contrast between what was expected at the time with Claudio and Hero against the modern thinking Beatrice and Benedick. As a modern reader I would expect that on the whole sympathies and admiration would be directed towards Beatrice and Benedick. ...read more.

He asks Benedick: ''Is she not a modest young lady?'' This question would be highly inappropriate in the modern world. It would come across as offensive and sexist. However there are still some cultures that adhere to these values even today. And so we have the four main players, each offering a variation of values and ideas which encourage us to debate the morals and values of the time. I think this was Shakespeare's intention. During the play each character becomes a victim of deception. We have different reactions to the sequence of events. The central deception begins with Claudio. The masked ball is a very useful tool here. It allows disguise to play a part. In Act 2 scene 1 Don John and Borachio pretend they think Claudio is Benedick. Don John says: '' Signor, you are very near my brother in his love, he is enamoured on Hero. In pray you disuade him from her, she is no equal for his birth: you may do the part of an honest man in it '' The conversation develops and Claudio is left without a shadow of doubt that this must be true. ...read more.

She had no independance and no hope pf getting any, thus she behaved as a dutiful daugher to Leonarto. She acts on orders from others throughout the play even though as Shakespeare has shown us she does have her own ideas. In conclusion, this play tackles love, marriage, friendship and society in a cleverly crafted way. Without two pairs of lovers we would have been unable to compare expectations of society against individual expectations. Shakespeare sucessfully explored Elizabethan values and ideas with Claudio and Hero. He provided the modern reader with a hero and heroine in Benedick and Beatrice. He allowed the Elizabethan audience to see a pair of lovers who were not willing to conform. The interest of the audience/reader is kept by the two plots running alongside one another. Without this the play would have been much less interesting and closed to certain discussion. He covers conventional, serious and often disturbing aspects of lover with Hero and Claudio, but contrasts them with the unconventional but meaningfull love of Beatrice and Benedick. All the themes chosen are as relevant today as they were when the play was written. I think it enables a modern reader to realise exactly what considerations had to be made with regard to love and relationships at the time and why. ...read more.