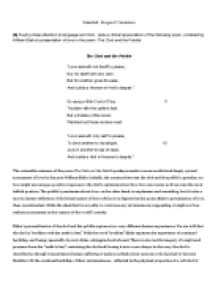 Consider William Blakes presentation of love in the poem The Clod and the Pebble.

Transfer-Encoding: chunked ﻿Selected: Songs of Ourselves (b) Paying close attention to language and form, write a critical appreciation of the following poem, considering William Blake?s presentation of love in the poem ?The Clod and the Pebble?. The Clod and the Pebble "Love seeketh not itself to please, Nor for itself hath any care, But for another gives its ease, And builds a Heaven in Hell's despair." So sung a little Clod of Clay 5 Trodden with the cattle's feet, But a Pebble of the brook Warbled out these metres meet: "Love seeketh only self to please, To bind another to its delight, 10 Joys in another's loss of ease, And builds a Hell in Heaven's despite." The ostensible cuteness of the poem The Clod and the Pebble perhaps masks a more morbid and deeply cynical assessment of love by the poet William Blake. Initially, the contrast between the clod and the pebble?s speeches on love might encourage a positive response to the clod?s optimism about how love can rescue us from even the most hellish position. ...read more.

It is then pleasantly surprising that the clod sings about love in the most optimistic way. On the one hand, the clod?s optimism concerning love is deeply admirable, and the parallel structure used to present this speech alongside the pebble?s emphasises that optimism in the most appealing way. The clod states that love ?builds a Heaven in Hell?s despair,? while the pebble states that it ?builds a Hell in Heaven?s despite.? The clod speaks from the context of a hellish existence that entails pain and suffering, and endows love with the capacity to transcend such an experience and create a heavenly existence of joy and happiness. The pebble, on the other hand, speaks from a comparatively heavenly existence and instead endows love with the capacity to corrupt that existence with the pain and suffering suggested by the word ?Hell.? Our feeling that the clod is admirably optimistic ten evolves into a feeling that we too want and even believe that love will rescue and provide solace to this figure. Conversely, the parallel structure also helps to emphasise the pebble?s pessimism. ...read more.

Traditionally, however, rivers also symbolise a journey from innocence to worldliness. The water represents the experience that flows over us during life, leaving us more aware. This experience has left the pebble implacable. We imagine someone who has become hardened from experience - and this is reflected in the physical properties of the pebble. Now the water is forced to bend around the pebble, just as the clod must bend around the feet of the cattle. This is a depiction of the world?s harshness and cruelty, and we cannot help but appreciate that it is the pebble?s assessment of love that more accurately reflects it. To conclude, perhaps the poem is as much about idealism and realism as it is about love. Love, after all, is subject to our tendency to be both idealistic and realistic. Ultimately though, it seems that the depiction of the world as harsh and brutal confirms a negative view of love as equally harsh and brutal. At the very least, the poem encourages us to be ambivalent of love and not suppose it to be a kind of saviour capable of transcending all. ...read more.