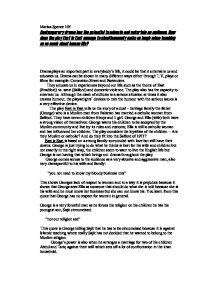 Contemporary drama has the potential to educate and entertain an audience. How does the play East is East manage to simultaneously make us laugh when teaching us so much about human life?

Marika Spence 10f Contemporary drama has the potential to educate and entertain an audience. How does the play East is East manage to simultaneously make us laugh when teaching us so much about human life? Drama plays an important part in everybody's life, it could be that it entertains us and educates us. Drama can be shown in many different ways either through T.V, plays or films for example: Coronation Street and Eastenders. They educate us in experiences beyond our life such as the theme of East (Bradford) vs. west (Salford) and domestic violence. The play also has the capacity to entertain us. Although the clash of cultures is a serious situation at times it also creates humour, the playwrights` devices to mix the humour with the serious issues is a very effective device. The play East is East tells us the story of a dual - heritage family the father (George) who is a Muslim man from Pakistan has married a catholic woman from Salford. They have seven children 6 boys and 1 girl. George and Ella (wife) both have a strong vision of themselves: George wants his children to be accepted by the Muslim community and live by its rules and customs; Ella is still a catholic woman and has influenced her children. The play considers the loyalties of the children - Are they Muslim or catholic? And do they fit into the Salford of 1971? East is East is based on a strong family surrounded with love but still have their downs. George is just trying to do what he thinks is best for his wife and children but not exactly in the right way, the children seem to want to live the English life but George is not having that which brings out drama throughout the play. George comes across to the audience as a very abusive and aggressive man, also very disrespectful to his wife and family: "you not need to know my bloody business mrs" This shows ...read more.

"how many time I tell you he dead." George's power over his family is very strong and everything he says goes, which results in the build up of the anger and tension in the Khan household. There are a lot of dramatic devices throughout this play; Sajits coat is one of them which is a very effective device because it has the audience also wondering why. Sajit constantly has his coat on and no-one knows why. This coat is filthy and greasy and no matter what he does not take it off, he even sleeps in it: "his coat on again last night." Sajit is not going to take that coat of so he is seen to his family as dirty. Sajit only really talks to his brother Abdul and when they have a one to one conversation Sajit lets us into why he wears the coat: "when it's all done up...I'm not there... I don't have to listen to anyone arguing and shouting at me... is that mad Abdul?" Sajit and Abduls relationship is very close and the audience then realize that Sajits parker is his protection from the arguments and fights. We see Sajit as a comic character throughout the play up until this point when he opens up to Abdul and the audience see him in a different light. After the visit from Mr.shah an argument happens between Ella and George, George then lashes out at Ella. Sajit takes of his coat and starts to hit George with it: "SAJIT takes off his coat, runs over, and starts to hit GEORGE with it." The coat is used as a device to protect him and his mum. The coat is symbolic for protection. Up until this point Sajit had never taken his coat of this shows a change in his character. Another dramatic device is how most of the scenes end on humour, which is a good way to keep the audience entertained but also adds tension and suspense. ...read more.

This also puts the audience in somebody else's shoes and may have made them go back and look at there own family and also on how they treat people not realising how it affects them. The play brings you through a range of emotions at times you feel sad and angry and at times you feel happy and joyful. The audience could leave the theatre upset or happy, they could either be hoping for the best for the family and happy that the play ended with a slight bit of humour or they could leave feeling sorry for the family and wondering/questioning what will happen next. The play entertained us through certain characters which were classed as comic characters such as: George and Sajit. Sajit and George both entertained us and made us laugh but were both also serious characters which is a good device. Sajit was a character that everyone felt sympathy for and probably had the audience wanting to take him home with them. He was also a comic character, he had the audience in laughter. George also had a funny sense of humour but the audience also hated him and at one time had sympathy for him.This again brings us back to the range of emotions the audience may have felt. When I read the play my emotions where going back and forward throughout. I left questioning the play and also on a mixture of emotions. Questions such as: Where will it go from here? Will George come back? Will the family ever be happy? Were all running through my head and I am sure they were going through other peoples minds to. I was happy and grateful to know that I did not have to go home to something like that but it also made me aware of what goes on in other people's households. In a way I think this play ends on a cliff-hanger because I left questioning, what was going to happen in the future, for the family and I will not know unless there is a East is East 2. ...read more.