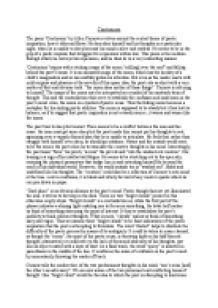 ﻿Continuum The poem ?Continuum? by Allen Curnow revolves around the central theme of poetic inspiration, how it ebbs and flows. He describes himself and his thoughts on a particular night, when he is unable to sleep because his mind is alive and restless. He seems to be in the grip of a poetic impulse that struggles for expression within him. This poem is the medium through which he conveys his experience, and he does so in a very interesting manner. ?Continuum? begins with a striking image of the moon ?roll[ing] over the roof? and falling behind the poet?s house. It is an animated image of the moon, which has the lucidity of a child?s imagination and so successfully grabs our attention. But even as the reader reacts with mild surprise and pleasure at the novelty of this queer idea, the poet cuts us short with a very matter-of-fact and obvious truth: ?the moon does neither of these things?. ...read more.

?Dark place? is an obvious allusion to the poet?s mind. Poetic thought has not yet illuminated the area; it strives to develop in the dark. There are two ?bright clouds? present in this otherwise empty abyss. ?Bright clouds? is a contradiction as, while the first part of the phrase indicates a shining light enabling one to focus on something, the latter half makes us think of something obscuring the point of interest. It thus re-establishes the poet?s inability to think coherent thoughts. What is more, ?clouds? makes us think of something hazy and vague. Thus we assume these ?bright clouds? to be faint indications of the poetic inspiration that the poet is attempting to formulate. The word ?dusted? helps to illustrate the difficulty of the poetic process by means of its ambiguity. It could be taken to mean cleaned, as though the ?moon?, the spirit of his poetic muse, is throwing light on his half-formed thought; alternatively it could refer to the lack of focus and obscurity of his thoughts, just like an object coated with a layer of dust. ...read more.

The burden of restlessness that he carried due to his frustrating inarticulate condition has lifted. The poem?s resolution is told from the point of view of the ordinary, sleep-deprived man. Now that his muse has got the business of creative inspiration out of the way, he desires nothing more than to go ?back to bed? and sleep. The poet in him shrinks and fades away as his mind shuts all connection with the outside world and drifts off to sleep. However, the muse is described as a ?cringing demiurge?, which makes us imagine the poet expressing disgust at his alter ego?s lack of appreciation for the poetic process. He ?stealthily? creeps away from the scene with his ?tools? in hand. The poetic process has not stopped; it will continue to develop new ideas, but now it will not do so at the expense of the man?s sleep. It seems to be a comment by Curnow on how the creative process in a poet?s mind never really stops, not even in sleep. Throughout the poem ?Continuum?, he uses enjambment to depict the continuity of the poetic process and a poet?s struggles with its highs and lows. ...read more.

This is a useful piece of analysis, brimming with ideas about the meaning of this difficult poem. Some of the analysis is a little too speculative and not sufficiently supported by the textual references.

Paragraph control, sentence structure and lexis are managed at a very high level. Phrasing in particular is highly polished. Quotations are skillfully merged into the text of the essay.

The work here would merit 5 stars but for some of its more speculative elements and its unsatisfactory concluding paragraph.