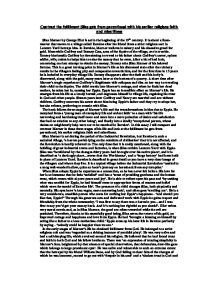 Contrast the fulfilment Silas gets from parenthood with his earlier religious faith and miserliness Silas Marner by George Eliot is set in the beginning of the 19th century. It is about a linen-weaver that moves to a village called Raveloe after his friend from a strict religious sect in Lantern Yard betrays him. In Raveloe, Marner wallows in misery and his obsessive greed for gold. Meanwhile Godfrey and Dunsey Cass, sons of the Squire of the village, are in trouble. Dunsey blackmails Godfrey by threatening to reveal to his father about Godfrey's secret, opium addict, wife, unless he helps him to raise the money that he owes. After a bit of bad luck, concerning one last attempt to obtain the money, Dunsey robs Silas Marner of his beloved fortune. This is a great turning point in Marner's life as his distressed state after the robbery results in the villagers feeling pity and compassion towards him, and for the first time in 15 years he is included in everyday village life. Dunsey disappears after the theft and his body is discovered, along with the gold, many years later at the bottom of a quarry. A short time after Marner's tragic experience Godfrey's illegitimate wife collapses and dies on her way to revealing their child to the Squire. The child crawls into Marner's cottage, and when he finds her dead mother, he takes her in, naming her Eppie. ...read more.

He had 'brought a blessing on himself by acting like a father to a lone motherless child.' Eppie sums up his later life in Raveloe perfectly by saying - 'nobody could be happier than we are.' In the early stages of Marner's life he obtained fulfilment from God. He belonged to a strict religious cult and was 'regarded as a shining instance of youthful piety'. He was very na�ve and had a self-denying life, which revolved around his religion. He believed that he had found trust and faith in both God and his fellow brethren. There was 'an expression of trusting simplicity in Marner's face, heightened by that absence of special observation, that defenceless, deer-like gaze which belongs to large prominent eyes'. He was na�ve and vulnerable to such an extreme extent that the betrayal by his friend William Dane, and by God failing to clear him of the charges of which he was innocent, caused to go out with 'despair in his soul' and a 'shaken trust in God and man'. The difference between this life and Marner's later life with Eppie is striking. In Lantern Yard he focuses entirely on God and believes that he has found ultimate happiness, because he knows no other life. 'We are apt to think it inevitable that a man in Marner's position should have begun to question the validity of an appeal to the divine judgement by drawing lots; but to him this would have been an effect of independent thought such as he had never known'. ...read more.

'O, what a dark ugly place...How it hides the sky! It's worse that the Workhouse. I'm glad you don't live in this town now' is a statement made by Eppie when they return to Lantern Yard. Eliot provides an extreme contrast to this when she describes Raveloe. 'It was an important looking village, with a fine old church and large churchyard, with well-walled orchards and ornamental weathercocks'. This is a comforting, homely image in comparison to the cold, heartless location of Lantern Yard. Eliot also uses this skill to contrast Silas's emotions when he lived alone as a miser with his emotions at the end of the novel. Before 'he sat in his loneliness by his dull fire, he leaned his elbows on his knees, and clasped his head with his hands, and moaned very low.' This creates a moving image of a very unhappy man, quite different from the happy, contented man we see later in the novel - 'the mild passive happiness of love-crowned age in his face'. Eliot uses a fair amount of imagery to portray the difference in Marner and his life between volumes 1 and 2. One example of this is her use of weather. During Marner's period as a hermit, when Dunstan robs him, there is 'rain and darkness', symbolising evil and depression. 'Happily the sunshine fell more warmly than usual' on the morning Eppie is married though. The sunshine and light represent the faith and contentment that Silas now feels. ?? ?? ?? ?? ...read more.