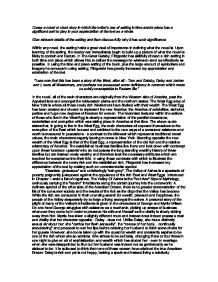 Coose a novel or short story in which the writer's use of setting in time and/or place has a significant part to play in your appreciation of the text as a whole.

Coose a novel or short story in which the writer's use of setting in time and/or place has a significant part to play in your appreciation of the text as a whole. Give relevant details of the setting and then discuss fully why it has such significance. Within any novel, the setting holds a great deal of importance in defining what the novel is. Upon learning of the setting, the reader can immediately begin to build up a picture of what the novel is likely to contain and feature. In The Great Gatsby, Fitzgerald has skillfully chosen a rich setting in both time and place which allows him to deliver the message he wishes to send as effectively as possible. In using the time and place setting of the book, plus the large amount of symbolism and imagery he conveys in using setting, Fitzgerald has greatly increased my appreciation and admiration of the text. "I see now that this has been a story of the West, after all-Tom and Gatsby, Daisy and Jordan and I, were all Westerners, and perhaps we possessed some deficiency in common which made us subtly unadaptable to Eastern life." ...read more.

Introduced in Chapter II amid a list of negatives, The Valley Of Ashes is the "foul river" Styx of Mythology, ominously carrying the "leaden" inhabitants along the certain journey into the underworld. A definate symbol of the other side of the American Dream, there is no greater demonstration of the ills of the consumer society and the results of the rich as the dirge that the Valley has become. While the rich are consumed in their unending search for wealth, pleasure and happiness, the people of the Valley desparately try to forge a living amongst the ashes. A personal story of the plight of many of the Valley's inhabitants is given in the characters of George and Myrtle Wilson. On one hand George struggles with existance as a mechanic, picking up scraps of business whenever they come by in order to preserve his wife and himself as the vitality is slowly ebbing away from him. Myrtle has taken a slightly different route and instead does indeed posess a zest and vitality that her character opposite - Daisy - does not. ...read more.

The original spirituality of the Dream in hailing a new, classless and equal society has been transformed into an empty show of consumerism and materialism - a dream which still continues to decline, symbolised by the billboard's continuing deterioration as time passes. The eyes themselves, due to the board's placement in The Valley Of Ashes, can perhaps be seen as looking over the true, rightful recipents of the fading Dream; the colours blue and yellow perhaps representing some kind of ailing hope for the future. Through the very inclusion of this billboard, Fitzgerald has provoked a large amount of speculation as to what it means. This then encouraged me to look into this aspect of the novel, increasing my overall appreciation of the novel. As is clear, the scale and importance of setting within this novel is one of the more important attributes to its success. Through looking at setting and the symbolism held within it, one is more informed and a greater clarity is given to the wider implications and messages that Fitzgerald was trying to illustrate at the time. When put with other aspects of the novel, the setting becomes even more essential in determining theme and, I believe, has been a vital device in enhancing my appreciation of the entire novel. ...read more.