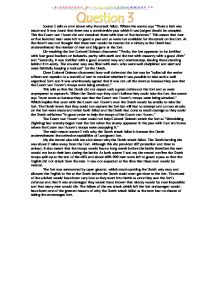 Source E tells us a lot about why the attack failed. Where the source says "There a halt was made and it was found that there was a considerable pass which it was judged should be occupied. This the Count van Hoorn did and remained there with four of five hundred." This means that four or five hundred men were left to guard a pass and so were not available for the attack on the fort. At the time it was not thought that these men would be needed for a victory as the Dutch had underestimated the number of men and big guns at the fort. On reaching the fort Colonel Dolman discovered "Firstly, the fort appeared to be fortified with four good bastions or bulwarks, partly with earth and ...read more.

It was not suspected at the time that these men would be needed. The fort was surrounded by open ground, which made spotting the Dutch very easy and allowed the English to fire at the Dutch before the Dutch could even get close to the fort. The moral of the soldiers would have been very low as they went into battle as once they saw the fort's defences and that it was undamaged they would have known that victory would be near impossible and that many men would die. The failure of the sea attack which left the fort undamaged would have been one of the greatest reasons of why the Dutch attack failed as the men had no chance of taking the undamaged fort. ...read more.