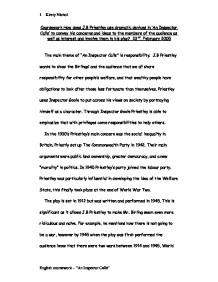 Coursework How does J.B Priestley use dramatic devices in 'An Inspector Calls' to convey his concerns and ideas to the members of the audience as well as interest and involve them in his play? 23rd, February 2005

Coursework How does J.B Priestley use dramatic devices in 'An Inspector Calls' to convey his concerns and ideas to the members of the audience as well as interest and involve them in his play? 23rd, February 2005 The main theme of "An Inspector Calls" is responsibility. J.B Priestley wants to show the Birlings' and the audience that we all share responsibility for other people's welfare, and that wealthy people have obligations to look after those less fortunate than themselves. Priestley uses Inspector Goole to put across his views on society by portraying himself as a character. Through Inspector Goole Priestley is able to emphasize that with privileges come responsibilities to help others. In the 1930's Priestley's main concern was the social inequality in Britain. Priestly set up The Commonwealth Party in 1942. Their main arguments were public land ownership, greater democracy, and a new "morality" in politics. In 1945 Priestley's party joined the labour party. Priestley was particularly influential in developing the idea of the Welfare State, this finally took place at the end of World War Two. The play is set in 1912 but was written and performed in 1945. This is significant as it allows J.B Priestley to make Mr. Birling seem even more ridiculous and na�ve. For example, he mentions how there is not going to be a war, however by 1945 when the play was first performed the audience know that there were two wars between 1914 and 1945, World War One and World War Two, which began in 1939. ...read more.

The inspector also says in his speech "fire and blood and anguish" as if that would be the result if they do not pay attention to the lesson that he has taught them. The inspector controls everything in the play from the end of act one and the start of act two. At the end of act two and the start of act three he has an inescapable company and is in control. As soon as he enters the scene the audience are grabbed by his presence, he is described as "an impression of massiveness, solidity and purposefulness. He is a man in his fifties, dressed in a plain darkish suit... He speaks carefully, weightily, and has a disconcerting habit of looking hard at the person he addresses before actually speaking". " An Inspector Calls" is a mysterious drama the way that Priestley describes the inspector, makes the inspector appears mysterious before the audience have become familiar with his character, therefore when Inspector Goole arrives onto the stage the audience want to know more about him. All that the inspector says creates drama as it stands out significantly in comparison to the Birlings' and Gerald. He likes to deal with "One Person and one line of enquiry at a time." his method of enquiry is extraordinary, he says one piece of information then allows the suspect to talk and eventually confess. Sheila describes this method as "He's giving us the rope - so that we'll hang ourselves." This represents the strength of his interrogation. ...read more.

Priestley changes the audiences' opinion of the Birling's as the play develops. At the beginning of the play the audience think that they are just a normal family, who are likeable even though Mr. Birling has an arrogant essence to his character; however towards the end of the play the audiences' opinion of the Birling's changes as the knowledge of the family's history is shocking. The audience would be disappointed in some of the characters as they are unable to realise that their actions have caused a death. However by the audience thinking this Priestley has interested and involved them because they have developed emotion for the characters. Priestley involves the audience here, as the audience would try to imagine how each of the characters is feeling. Priestley is also conveying his ideas here. The audience would realise that everyone is responsible for each other. Priestley interests and involves the audience by having a lot of tension in the play "An Inspector Calls". Priestley also interests them by having an exciting plot and a wide range of characters. He involves the audience by using dramatic irony very early on in the play and using characters to put across his concerns, such as the inspector in his speech tells the Birling's "each of you helped to kill her." This is not only aimed at the characters on stage but at the audience too. Priestley's message in "An Inspector Calls" is responsibility and how everyone is responsible for other people, we are all linked in society. This message is still relevant today because we still have responsibilities for other people and our actions do affect others. ?? ?? ?? ?? 1 Kirsty Nichol English coursework - "An Inspector Calls" ...read more.