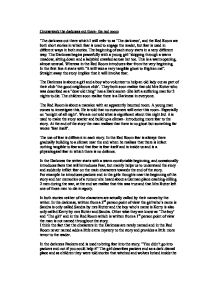 Coursework the darkness out there- the red room

Coursework the darkness out there- the red room 'The darkness out there which I will refer to as 'The darkness', and the Red Room are both short stories in which fear is used to engage the reader, but fear is used in different ways in both stories. The beginning of each story starts in a very different way. The Darkness begins peacefully with a young girl 'skipping through a warm meadow, sitting down and a ladybird crawled across her toe. This is a warm opening, almost sensual. Whereas in the Red Room introduces fear from the very beginning. In the first line it starts with "it will take a very tangible ghost to frighten me". Straight away the story implies that it will involve fear. The Darkness is about a girl and a boy who volunteer to help an old lady out as part of their club 'the good neighbours club'. They both soon realise that old Mrs Rutter who was described as a "dear old thing" has a Dark secret- She left a suffering man for 2 nights to die. The children soon realise there is a Darkness in everyone. ...read more.

"Don't go into the room tonight of all nights- you go on your own choosing". I enjoyed reading 'The Darkness' because it was unpredictable. The pace of the story began slowly but suddenly increases and the plot is not given away until the end. The writer describes that these are normal children (look up examples). However in the Red Room the story was fairly predictable, From the first line you can tell that something is going to scare the man, in the story by the phrase' it will take a very tangible ghost to frighten me' It does indicate that he will see a ghost. I did not enjoy this story as much although I did like that fact that the moral of the story was unpredictable and original. There are quite a few aspects that link the stories together. The main aspect is the connection between 'the Red Room' and Packers end. Both of these places are used to increase fear in the stories (wolves witches, rape, Crash) Packers End a dark weary place where most normal people don't dare to go. Both places are Dark and appear scary to people. ...read more.

The girl in "the Darkness" is very quick to judge people; her thoughts about people are very shallow. When she first meets Kerry Stevens she dislikes him because her friends didn't think much of him 'none of her lot reckoned much on him'. She also judges him by his looks- he look scruffy and mucky so she believes that he's a dirty impolite boy. She later gets close to him and begins to like him, from when they first meet he offers her some of his chocolate and realises that they have a lot in common and that he's really a generous and more sensitive person than she is. She also assumes that Mrs Rutter is a regular 'nice old biscuit' but later finds out what she is like inside The man in 'the red rooms' thoughts are also very shallow at the beginning of the story. When the old man tells him not to go in the room, he judges him as foolish for believing that there is a ghost inside. Soon after he realises that he is not so brave and falls into the trap of wrapping himself in fear. ...read more.