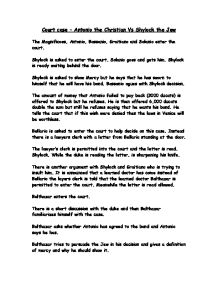 Court case - Antonio the Christian Vs Shylock the Jew.

Court case - Antonio the Christian Vs Shylock the Jew The Magnificoes, Antonio, Bassanio, Graitiano and Solanio enter the court. Shylock is asked to enter the court. Solanio goes and gets him. Shylock is ready waiting behind the door. Shylock is asked to show Mercy but he says that he has sworn to himself that he will have his bond. Bassanio agues with Shylock decision. The amount of money that Antonio failed to pay back (3000 ducats) is offered to Shylock but he refuses. He is then offered 6,000 ducats double the sum but still he refuses saying that he wants his bond. He tells the court that if this wish were denied then the laws in Venice will be worthless. ...read more.

It is announced that a learned doctor has come instead of Bellario the layers clerk is told that the learned doctor Balthazar is permitted to enter the court. Meanwhile the letter is read allowed. Balthazar enters the court. There is a short discussion with the duke and then Balthazar familiarizes himself with the case. Balthazar asks whether Antonio has agreed to the bond and Antonio says he has. Balthazar tries to persuade the Jew in his decision and gives a definition of mercy and why he should show it. Another offer is made to the Jew. Bassanio offers the money and self-sacrifice instead of the death of Antonio but the offer is refused. ...read more.

Balthazar announces that the pound of flesh is rewarded to the Jew. Just as Shylock is about to cut the flesh Balthazar stops him and explains how in the bond it clearly says a pound of flesh not blood so in cutting his pound of flesh by law he is not allowed to drop any blood. The Jew now decides he will take the 9,000 ducats and Bassanio is eager to give it to him but Balthazar does not let him. He tells Shylock how he has committed another crime in wanting the death of another man. Antonio and the duke are asked to show mercy. Antonio says that he wants Shylock to become a Christian and for him to provide for his daughter Jessica and Lorenzo. These terms Antonio says are granted. Shylock leaves the court feeling ill. ...read more.