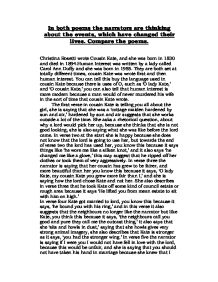 Cousin Kate is about a girl who is rejected by the lord of the manor in preference for her cousin. Human Interest involves a man who stabs his partner because he discovered her with another man. In

In both poems the narrators are thinking about the events, which have changed their lives. Compare the poems. Christina Rosetti wrote Cousin Kate, and she was born in 1830 and died in 1894.Human Interest was written by a lady called Carol Ann Duffy and she was born in 1955. They are both set at totally different times, cousin Kate was wrote first and then human interest. You can tell this buy the language used in cousin Kate because there is uses of O, such as 'O lady Kate,' and 'O cousin Kate,' you can also tell that human interest is more modern because a man would of never murdered his wife in the sort of time that cousin Kate wrote. The first verse in cousin Kate is telling you all about the girl, she is saying that she was a 'cottage maiden hardened by sun and air,' hardened by sun and air suggests that she works outside a lot of the time. She asks a rhetorical question, about why a lord would pick her up, because she thinks that she is not good looking, she is also saying what she was like before the lord came. ...read more.

In verse six the narrator is saying that she has something better than Kate and that is a child, it says, 'yet I've a gift you have not got, and seem not like to get' this suggests that Kate is unable to have children, she also says my pride this means she loves him very much. There are a few words that are unusual in the poem, an example is flaxen this means blonde or pale coloured. Another is rye this is crop or grain. Another word that I found unusual in the poem was fret, this means worry unnecessarily. Another is coronet this means a small crown. These words keep me interested in the poem. The first verse in Human Interest is telling the reader that the narrator has been put in prison, you know this as it says, 'fifteen years minimum banged up inside,' and it only took him thirty seconds to do this crime, the writer writes that so you know that he got fifteen years in jail all for thirty seconds. On the third line in the first verse you can start to work out that he has killed a lady as it says, 'she turned away. ...read more.

Both poems are stories of love and both poems deal with broken relationships but they are quite different in how they do it. cousin Kate is about a girl who is rejected by the lord of the manor in preference for her cousin. Human Interest involves a man who stabs his partner because he discovered her with another man. In cousin Kate I think that both Kate and the narrator are victims because of how the lord has treated them and the lord is culprit for treating them in this way. Where as in human interest there is only one victim that is the narrator's lover, and the culprit is the man who murdered his wife. But human interest is different, as the language in the poem is a lot more modern and the events that happen in the poem such as the narrator murdering his lover would never of happened at the time when cousin Kate was written as I mentioned at the start. My favourite poem would have to be human interest I find it interesting to read and it is a very strong poem with some good imagery. Cousin Kate is also good but I find it to be a bit less interesting David squires 10hraz ...read more.