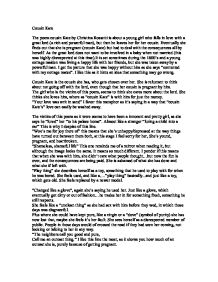 Cousin Kate The poem cousin Kate by Christina Rossetti is about a young girl who falls in love with a great lord (a rich and powerful man), but then he leaves her for her cousin. Eventually she finds out that she is pregnant (cousin Kate) but had to deal with the consequences all by herself. As the great lord does not want to be involved in a baby when not married (this was highly disrespected at this time).It is set sometimes during the 1800's and a young cottage maiden was living a happy life with her friends, but she was taken away by a powerful man. I get the picture that she was happy without him as she says "contented with my cottage mates". I like this as it hints an idea that something may go wrong. Cousin Kate is the cousin she has, who gets chosen over her. She is reluctant to think about not going off with the lord, even though that her cousin is pregnant by him. The girl who is the victim of this poem, seems to think she cares more about the lord. ...read more.

As she says, even though you have the money, I've got something he needs, and I love. As the lord needs to son to carry on his name.. "My pride, my shame" The baby is all that she is living for, then the only reason she is living in this state. She tells her son" your father would give lands for one to wear his coronet" even though he has not got a child, he would give almost everything, so that his family name has the chance of surviving. At the end of this poem...I feel that the lord is feeling so stupid, guilty, and he's probably self conscious of the stupid things he has done to lose the child he will never have named after him. The seduction The seduction is about a grubby one night stand, which leaves a young teen girl pregnant. The boy has a "bad boy" image. The image is put into mind when "kisses that taste of nicotine" firstly but there are also other details about him which show that perspective of him off. What can I say...he reads porn magazines, "sniffs glue", and goes to school rarely. ...read more.

Just so that the vicious public couldn't win one over her if you like. I would say it appeals more to girls as it does to boys. As there's a lesson to be learnt for girls here, telling them that the world isn't such a nice place after all. I've got to say that the end bit sticks in my head the most as it has the power to drag someone's emotions down in the dumps. Whilst I like Cousin Kate more as it's not as grubby as the seduction. The content difference is that the seduction tells more detail like how the "kisses tasted of nicotine"; Where as cousin Kate just skips to the point. Also the styles are different as in "the seduction" seems to blame it on the male. Whilst in "Cousin Kate" the assault is focused more on Kate. "Cousin Kate" is set is the past as well. So although the two poems are about the same thing, young girls getting pregnant "When she discovered she was three months gone"...and getting hurt.... "She sobbed" They're still very different as the woman in "Cousin Kate" is out for revenge. Whilst the girl in "the seduction", just wants to have fun. I prefer the poem "Cousin Kate" overall as it's short, and it flows. Unlike The poem called "the seduction". ...read more.