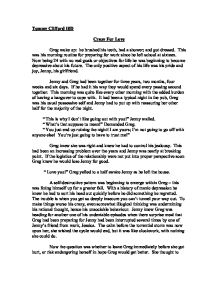 Tommy Clifford 10D Crazy For Love Greg woke up: he brushed his teeth, had a shower; and got dressed. This was his morning routine for preparing for work since he left school at sixteen. Now being 24 with no real goals or objectives for life he was beginning to become depressive about his future. The only positive aspect of his life was his pride and joy, Jenny, his girlfriend. Jenny and Greg had been together for three years, two months, four weeks and six days. If he had it his way they would spend every passing second together. This morning was quite like every other morning with the added burden of having a hangover to cope with. It had been a typical night in the pub, Greg was his usual possessive self and Jenny had to put up with reassuring her other half for the majority of the night. " This is why I don't like going out with you!" ...read more.

On one hand she had extremely strong feelings for Greg and loved him dearly, on the other hand his obsessive, unrealistic behaviour was really starting to wear her out and create feuds between the two. " I have got to go and see Jess" Jenny said with pleading eyes. "Oh yeah! That's right, abandon me after I have put all this effort in!" A disgruntled Greg said. "She really needs me?" "Yeah I need you! Why does she have to see you now! It's Friday night! You just want to go out drinking with her and get with another guy don't you?" "NO!" Shouted Jenny. The tell tail signs were here again, but this time Jenny wasn't going to be walked all over again. "If you want this relationship to work you will just have to trust me! I love you but Jess needs me, see you later!" An exasperated Jenny left the house. At first Greg just sat there with his head in his hands. ...read more.

"Why are you still holding that knife?" A scared Jenny croaked. Spinning her around, he held the knife to her throat. Jenny could not stop shaking she knew had to do some quick thinking, but she was so petrified she could not find her voice. Greg continued... "At this moment you love me and because of this I need to keep your love right here right now. I will never risk you falling out of love with me because you won't have a chance to love again. I want to remember this moment of pure love forever." With that he slit her throat. Hours must have passed with Greg holding the lifeless Jenny in his arms. Both drenched in blood and rocking backwards and forwards. Greg was somewhat happy despite his crying. "We will be in love forever now, see, I told you it would work!" Greg did not hear the sirens; he did not see the police even when arresting him. All senses were gone. Now sitting in a mental health cell he repeatedly talks about his and Jenny's love, and how it will always be there and can never be taken away! ...read more.