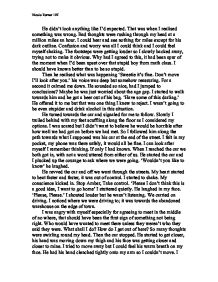 He didn’t look anything like I’d expected. That was when I realised something was wrong. Bad thoughts were rushing through my head at a million miles an hour. I could hear and see nothing for miles except for his dark outline. Confusion and worry was all I could think and I could feel myself shaking. The footsteps were getting louder so I slowly backed away, trying not to make it obvious. Why had I agreed to this, it had been spur of the moment when I’d been upset over that stupid boy from math class. I should have known better than to be so stupid.

Then he realised what was happening ‘Sweetie it’s fine. Don’t move I’ll look after you.’ his voice was deep but somehow reassuring. For a second it calmed me down. He sounded so nice, had I jumped to conclusions? Maybe he was just worried about the age gap. I started to walk towards him and he got a beer out of his bag. ‘Have some of this darling.’ He offered it to me but that was one thing I knew to reject. I wasn’t going to be even stupider and drink alcohol in this situation.

He turned towards the car and signaled for me to follow. Slowly I trailed behind with my feet scuffling along the floor as I considered my options. I was scared but I didn’t want to believe he would be horrible after how well we had got on before we had met. So I followed him along the path towards what I supposed was his car at the end of the street. I felt in my pocket, my phone was there safely, it would all be fine. I can look after myself I remember thinking. If only I had known. When I reached the car we both got in, with not a word uttered from either of us. He started the car and I plucked up the courage to ask where we were going. ‘Wouldn’t you like to know’ he laughed.

He revved the car and off we went through the streets. My heart started to beat faster and faster, it was out of control. I started to shake. My conscience kicked in. Stop Amber, Take control. ‘Please I don’t think this is a good idea, I want to go home’ I stuttered quietly. He laughed in my face. ‘Please, Please.’ I shouted louder but he wasn’t listening. We carried on driving. I noticed where we were driving to; it was towards the abandoned warehouse on the edge of town.

I was angry with myself especially for agreeing to meet in the middle of no where, that should have been the first sign of something not being right. Who would have wanted to meet there unless they weren’t who they said they were. What shall I do? How do I get out of here? So many thoughts were swirling round my head. Then the car stopped. He started to get closer, his hand was moving down my thigh and his face was getting closer and closer to mine. I tried to move away but I could feel his warm breath on my face. He had his hand clenched tightly onto my arm so I couldn’t move. I kicked and he grabbed me even harder. I could feel his sweaty hand moving up my skirt and under my tights. I couldn’t talk, I was frozen with fear.

Then I don’t know what came over me but suddenly I wasn’t scared anymore. I spat as hard as I could in his face. His shock made him pull back, this was my chance to get out. I hit him as hard as my arms would let me, moved back and then kicked him in the face. I saw his hand move towards the lock button on the car. As quick as I could I pushed the door open and fell to the street floor. Grabbing my bag I got up and ran as fast as my legs could go. I could hear shouting and screaming from behind but I daren’t look back. He was running after me, I could hear his feet pounding against the street floor. I felt a hand grab my shoulder and push me against the floor.

‘I think she’s waking up’ I heard people whispering around me. Slowly I opened my eyes and above me I could see what seemed to be a doctor and a man dressed in a suit. ‘Amber, are you okay? Do you remember what happened the other day?’ The other day? Last thing I remember was lying on the street floor looking into those dark brown eyes. Then I looked to the side and I could faintly make out the body of a man asleep on a bed next to me. As they saw me look over they started to draw the curtain around him but not before I saw them. Handcuffs locking him to the bed. It was him.