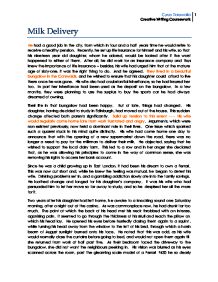 Milk Delivery He had a good job in the city, from which in four and a half years time he would retire to receive a healthy pension. Recently, he set up life insurance for himself and his wife, so that his nineteen year old daughter, whom he adored, would be looked after if the worst happened to either of them. After all, he did work for an insurance company and thus knew the importance of life insurance - besides, his wife had urged him that at the mature age of sixty-one, it was the right thing to do. And he agreed. They lived in a beautiful bungalow in the Cotswolds, and he wished to ensure that his daughter could afford to live there once he was gone. His wife also had a substantial inheritance, so he had insured her too. In part her inheritance had been used as the deposit on the bungalow. In a few months, they were planning to use the surplus to buy the sports car he had always dreamed of owning. Their life in that bungalow had been happy. But of late, things had changed. His daughter, having decided to study in Edinburgh, had moved out of the house. ...read more.

At this point, a ball of vomit burned the back of his throat as he remembered the terrors of the night before. His eyes had adjusted to the light now, and he nearly fainted as he saw the crimson smear which dripped down the bottom left window pane beside his head; causing the empty driveway to the bungalow to be tinted an eerie red. He stared at this for what seemed like an hour as the events of the night before flooded into his mind in grotesque detail. Like a video being played back to him, he saw the hand clasping the model Ferrari smashing downwards with intense ferocity. He heard the metallic thud as the car's nose pierced through skin and hit bone. Blood spurted out of the skull and trickled onto his wife's white blouse. The mutual hatred the couple had for one another had reached a breaking point, in a fiery argument. This act was intended to end the relationship completely, in the most satisfying way possible - death would bring relief. Superb description..... needs to be like this in 1st para At last, he turned his head back to the Ferrari in the corner, and noticed its body had been stained a darker shade of red. ...read more.

"You will be pleased to hear that we found your wife. She was pulled over for dangerous driving on the M18, near Doncaster. She pulled over, and, while performing the breathalyser test, the officer noticed the blood stains on her blouse. He put two and two together and so checked the photograph he had been supplied with. When he asked her to step out of the vehicle, she tried to escape on foot. Unfortunately we were unable to apprehend her before she got run over while attempting to cross the motorway. She died on her way to the hospital. We offer our condolences for your loss." He nodded in reply. "So, it turns out you were right - she thought she had killed you. We found the family portrait in the glove compartment." The inspector placed it on the table beside his bed. "By the way, she had five times the allowance of alcohol in her blood." Again he nodded. The following week, as he was being discharged from the hospital, the nurse informed him that his lawyer had called to arrange a meeting about his wife's life insurance. He could hardly suppress a smile as he boarded the elevator down to the hospital reception. As he left the hospital he flagged a taxi and stepped inside. "Any idea where the nearest Ferrari dealership is, mate?" ?? ?? ?? ?? Cyrus Daruwalla Creative Writing Coursework 1 ...read more.