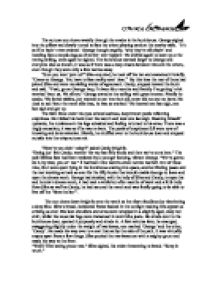 Of Mice and Men Sequel The autumn sun shone weakly through the cracks in the bunkhouse. George sighed into the pillow and slowly turned to face the others playing cards at the nearby table. 'It's as if he hadn't even existed.' George thought angrily, 'why they're all playin' and howling like a coupla dogs as if nothin' ever happen.' He shifted again to stare up at the rotting ceiling, once again he sighed. The bunkhouse seemed larger to George and everyone else so distant, it was as if there was a deep chasm between him and the others, even though they were only a few metres away. "Sure you won' join us?" Slim enquired; he took off his hat and examined it briefly. "Come on George. You have to face reality som' time." By this time the rest of them had joined Slim and were mumbling words of agreement. Candy, stepped toward the bunk and said. "Yeah, go on Georgy- boy, I's been four months and frankly I'm getting' a bit worried 'bout ya. ...read more.

Out of those nine, four were spent lying in the bunkhouse staring into space, another finding peace and the rest working as hard as ever for the fifty bucks that would enable George to leave and open the dream ranch. George had decided, with the help of Slim and Candy, to open his and Lennie's dream ranch, it had took a while but after months of work and a little help from Slim as well as Candy, he had secured the ranch and was finally going to be able to live off the "fatta the lan'". The sun shone down brightly onto the ranch as the clear cloudless sky ricocheting a deep blue. Slim's broad, handsome frame basked in the sunlight making him appear as striking as ever. His lean shoulders and arms were wrapped in a slightly aged, deep red shirt, whilst his muscular legs were immersed in worn blue jeans. He strode over to the bunkhouse door, opened it purposely and strode in. A few minutes later, he emerged, swaggering slightly under the weight of two boxes, one marked 'George' and the other, 'Candy'. ...read more.

ya kno'..." Carlson shifted uncomfortably while looking down at the ground. "Ok then. Thanks for the concern." George said abruptly. "ppreciate it." With that, George joined Candy at the front of the cart, and set off. A few days had passed and things seemed to be going as slow as ever, the days seemed like months and the nights like years. Nothing exciting had happened to George and Candy, all except for a frog that was hopping along. The monotonous sound of the horse's hooves threatened to send George into a deep slumber. And Candy, he just sat next to George occasionally lifting his left hand to rub his stumped wrist. Just then, a woman appeared. Not just any woman, the most beautiful woman in the world according to George. Her light brown hair with streaks of a deep red that almost looked brown in the light was delicately waved. It framed her oval face perfectly. Her emerald green eyes looked at George wistfully, as if to decide whether he was approachable. Her soft pink lips parted as she slid her perfectly manicured fingers into her mouth. She whistled at the cart to grab George's already given attention. ?? ?? ?? ?? ...read more.