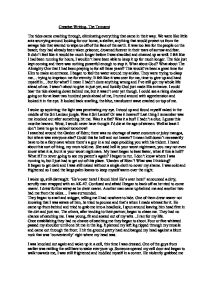 Creative Writing- The Tsunami The tides came crashing through, eliminating everything that came in their way. We were like little ants scurrying around looking for our home, a shelter, anything that would protect us from the savage tide that wanted to wipe us off of the face of the earth. It was too late for the people on the beach; they had already been taken prisoner, drowned forever in their tears of sorrow and fear. It didn't feel like it would be much longer before I was shackled and chained up as well. I felt like I had been running for hours, I wouldn't have been able to keep it up for much longer. The tide just kept coming and there was nothing powerful enough to stop it. What about God? What about The Almighty One that I had been praying to for all these years? This would've been a great time for Him to make an entrance. I began to feel the water around my ankles. They were trying to clasp me... trying to imprison me for eternity. It felt like it was over for me, time to give up and hand myself in... but for what? I mean I hadn't done anything wrong and I've still got my whole life ahead of me. I wasn't about to give in just yet, and luckily God just made His entrance. I could hear the tide slowing down behind me, but it wasn't over yet though. ...read more.

The boy came out whimpering, holding on to his falling trousers as he ran in to the toilets. The guard came out a few seconds after with a satisfied smirk on his face, tucking his shirt in to his trousers. Everyone glared at the guard with the most piercing of looks. The guard, tense and somewhat frightened, shot his rifle in the air and yelled at everyone to get back to what they were doing. I was first to finish the assault course and I asked if I could go to the toilet. The guard said 'be quick'. When I got to the toilet I heard whimpering, it was the young boy. I found him curled up inside one of the cubicles. He told me to go away when I asked him what happened in the jungle. "I'm only here to help, I won't tell anyone... what happened?" "As if you don't know" He replied in a shuddering voice. I asked him his name, he replied 'Bhavan'. I asked Bhavan how he got here. He gave me a weird look and replied 'You know very well how I got here you bastard, leave me alone!' I didn't know what I had done to make him so angry with me. "Look here's the deal, I woke up yesterday in the middle of that jungle, and some men chased me then shot me. I woke up this morning in the cell without a clue where I am, what I'm doing here, who these people are, or how I'm going to get out of here! ...read more.

"Let this be a lesson to all of you, if you think you can take me this is what happens!" As he was cocking his pistol he aimed it directly at my throat. It was the end for me, I had my chance and I blew it. Everyone stood anxious and nervous to see if he was really going to shoot. "BANG!" I opened my eyes and I was still there. I had no wounds, no blood was pouring out of the back of my head. I was still alive. Gander collapsed to the ground a clean bullet hole went straight through his head. Behind him stood Bhavan still shivering and whimpering this time his hands clasped a smoking rifle that was aimed directly at Gander's head. The guards didn't know what to do. They were shocked, still holding my hair. I stood up and pushed them aside. All the prisoners, armed with rifles. We stood side by side facing the weak and vulnerable guards. One of the guards reached for his weapon, and then we just started firing. We shot and shot at them until the end of our magazines. We were free, no more Gander, no more guards. The prisoners began to dance and hoololate. "We are free!" One man shouted. I still didn't feel free... I thought the death of Gander would bring me joy and happiness. I ran to the jungle. Once I got there I just started to run and run some more, in no particular direction, just until the day comes that I may join my parents and my little sister. ...read more.