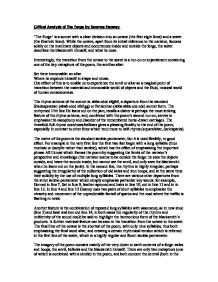 Critical Analysis of The Forge by Seamus Heaney

Critical Analysis of The Forge by Seamus Heaney 'The Forge' is a sonnet with a clear division into an octave (the first eight lines) and a sestet (the final six lines). While the octave, apart from its initial reference to the narrator, focuses solely on the inanimate objects and occurrences inside and outside the forge, the sestet describes the blacksmith himself, and what he does. Interestingly, the transition from the octave to the sestet is a run-on or enjambment containing one of the key metaphors of the poem, the anvil as altar: Set there immovable: an altar Where he expends himself in shape and music. One effect of this is to enable us to experience the anvil or altar as a magical point of transition between the material and immovable world of objects and the fluid, musical world of human consciousness. The rhyme scheme of the sonnet is: abba cddc efgfef, a departure from the standard Shakespearean (abab cdcd efef gg) or Petrarchan (abba abba cde cde) ...read more.

In line 4 and line 12 Heaney uses two pairs of short syllables to emphasise the vivacity and movement of the unpredictable fantail of sparks and the road where the traffic is flashing in rows. Another feature is the combination of repeated long syllables with assonance, as in new shoe (line 5) and beat real iron out line 14; in both cases the regularity of the rhythm and uniformity of the sound could be said to highlight the harmonious form of the blacksmith's products. A further metrical feature can be seen in the transition from the octave to the sestet. The final line of the octave is the shortest of the poem, with only nine syllables, thus both emphasising the final word altar, and creating a certain rhythmical tension which is relieved in the first line of the sestet, which is a highly regular and fluent iambic pentameter. ...read more.

The dark interior of the forge as a whole symbolises the obscure depths of the poet's experience, while the new shoe which toughens in water symbolises the way in which the poet's words are the solid crystallisation of those depths. Likewise, the anvil, being at the centre of the forge, perhaps represents the mythical (it is compared to a unicorn) core of the poet's experience. When struck by the hammer (perhaps symbolising a quick flash of insight), the anvil emits a sound (a short-pitched ring) and an unpredictable fantail of sparks, which again may symbolise the unpredictable yet beautiful, spoken or written words of the poem. We may thus make sense of the metaphor of the anvil as altar, as comparing the poet's devotion to the creation of a poem to religious worship or prayer. The exterior of the forge may symbolise the mundane, unpoetic world of modern life (the trafficflashing in rows), which the blacksmith/poet seems to scorn in favour of the remembered past (recalls a clatter of hoofs) and the supposedly more real activity of beating iron, i.e. poetic activity. ...read more.

The triumph of this analysis is that, after systematically examining the elements of this poem, the writer is able to draw them together again in one final proposition that links the sounds and sights of the forge, the mythical/religious themes and the process of poetic creation itself.

Sentence and paragraph construction are effectively managed thoughout, with one exception. However, there is a strange omission of suitable marking of quotations which makes reading the essay a little difficult in parts. This may have arisen in the process of transferring the essay into its current form; for instance, the quotations may have been in italics that have reverted to standard font.

Overall, this is a very successful essay.