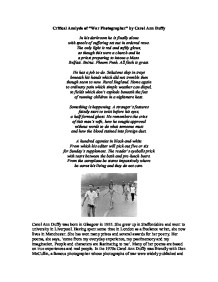 Critical Analysis of "War Photographer" by Carol Ann Duffy In his darkroom he is finally alone with spools of suffering set out in ordered rows. The only light is red and softly glows, as though this were a church and he a priest preparing to intone a Mass. Belfast. Beirut. Phnom Penh. All flesh is grass. He has a job to do. Solutions slop in trays beneath his hands which did not tremble then though seem to now. Rural England. Home again to ordinary pain which simple weather can dispel, to fields which don't explode beneath the feet of running children in a nightmare heat. Something is happening. A stranger's features faintly start to twist before his eyes, a half-formed ghost. He remembers the cries of this man's wife, how he sought approval without words to do what someone must and how the blood stained into foreign dust. A hundred agonies in black-and-white From which his editor will pick out five or six for Sunday's supplement. ...read more.

People are glad to distance themselves from the harsh realities of war whilst keeping themselves informed of, and superficially sympathetic to these real life situations. The structure of this poem supports this dichotomy in that there are two contrasting worlds: the world of war zones ("Belfast. Beirut. Phnom Penh.") and the calmer world of "Rural England". The war photographer is the man who goes between these two worlds. The safe world of England is signified by the clich�s of a typical Sunday: "The bath and pre-lunch beers" while the horror of war is expressed through much more startling language: "...blood stained into foreign dust." Appropriately for a poem connected with a Sunday supplement, colours are important in the poem. The atmosphere of the opening stanza is almost religious, with a biblical quote in line 6: "All flesh is grass", and the colours contribute to this: "darkroom...the only light is red and softly glows". The colours move through "the blood" of stanza three to the suitably "black-and-white" of the final stanza's newsprint. ...read more.

He has "Solutions...in trays" and an "editor"- a picture full of humanity. The sense of connection in the poem (which the poet seems to suggest we are not sufficiently aware of) is heightened by the enjambement within each stanza: "Home again to ordinary pain which simple weather can dispel, to fields which don't explode beneath the feet of running children in a nightmare heat." Rhyming couplets within the stanzas also add to this. They appear normally in the second and third line, and in the last two lines: "...rows...glows", "...Mass...grass". The last line of the poem - a stark juxtaposition - seems to focus the reader's thoughts on the dilemma posed by war reporting: "he earns his living and they do not care." In my view, Duffy is siding with the photographer in the poem. While many people would think it inhumane to take pictures of suffering and death whilst not attempting to help the subjects, she portrays him as a man with feelings, who have forced himself to do his job "impassively". Who is it, she wonders, who is inhumane? The photographer or the reader? ...read more.