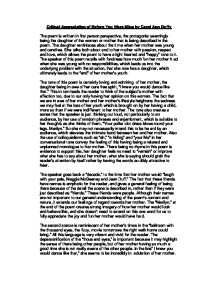 Critical Appreciation of Before You Were Mine by Carol Ann Duffy.

Critical Appreciation of Before You Were Mine by Carol Ann Duffy The poem is written in first person perspective, the protagonist seemingly being the daughter of the woman or mother that is being described in the poem. The daughter reminisces about the time when her mother was young and carefree. She talks both about and to her mother with passion, respect and love, which allows the poem to have a light hearted and "happy" tone to it. The speaker of this poem recalls with fondness how much fun her mother had when she was young with no responsibilities, which leads us into the underlying problem with the situation, that she now has a daughter, which ultimately leads to the "end" of her mother's youth. The tone of this poem is certainly loving and admiring of her mother, the daughter being in awe of her care free spirit, "I knew you would dance like that." This in turn leads the reader to think of the subject's mother with affection too, due to our only having her opinion on this woman. ...read more.

Although their names are not important to our general understanding of the poem's content and nature, it extends our feelings of regard towards her mother. The "Marilyn," at the end of the poem creates strong imagery of how her mother would look and behave like, and she doesn't need to extend on this one word for us to fully appreciate the joy and fun her mother would have had. The second stanza is reminiscent of her mother's times in the "ballroom with the thousand eyes, the fizzy, movie tomorrows the right walk home could bring." All this language is very vibrant and vivid for the reader. The depersonification of the "thousand eyes," is important because it may highlight the sense of there being other people, but of her mother having so much a good time she is not really aware of the other people. In the line" I knew you would dance like that," she seems to be incredibly in adulation of her mother. ...read more.

Then the poet gives us a vivid insight of the music her mother would be dancing to, "Cha cha cha!" Then it might be with some regret that it is from "Mass" that she is taught the steps, from "the wrong pavement." It doesn't seem something that her fun-loving mother would have willingly chosen to go to, so this reminds us of the impact her daughter has had on her life. The last thought is quite conclusive, "that glamorous love lasts where you sparkle and waltz and laugh before you were mine." The non-standard grammar with repetition of "and" increases the feeling that her daughter is lively and excited to be revelling in her mother. In a way she may be saying that although her mother may not "sparkle and waltz and laugh" anymore, she will still do so in her own imagination. She is constantly aware that her very own presence may have stopped her mother from having fun anymore, but she has accepted this and suggests that that time is still ever-present, "that glamorous love lasts," in whatever form it may take whether real or in her imagination. ...read more.