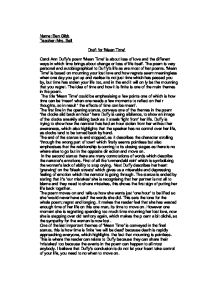 Name: Ben Gibb Teacher: Mrs. Sell Draft for 'Mean Time' Carol Ann Duffy's poem 'Mean Time' is about loss of love and the different ways in which time brings about change or loss of life itself. The poem is very personal and autobiographical to Duffy's life as are most of her poems. 'Mean Time' is based on mourning your lost love and how regrets seem meaningless when one day you get up and realise its not just time which has passed you by, but time has stolen your life too, and in the end it will only be the mourning that you regret. The idea of time and how it is finite is one of the main themes in the poem. The title 'Mean Time' could be emphasising a few points one of which is how time can be 'mean' when one needs a few moments to reflect on their thoughts, so in result ' the effects of time can be mean'. The first line in the opening stanza, conveys one of the themes in the poem 'the clocks slid back an hour' here Duffy is using sibilance, to show an image of the clocks sneakily sliding back as it steals 'light from' her life. ...read more.

One of the last important themes of 'Mean Time' is conveyed in the final stanza, this is how time is finite 'we will be dead' because death is rapidly approaching everyone, which highlights the fact that mourning is pointless. This is where the reader can relate to Duffy because they can share their 'mistakes' too because the events in the poem can happen to all most anybody. I believe that Duffy's conclusion is do not let your heart take control of your life, you need to no when to move on. The language throughout is very calm and well organised which helps to emphasises the realism of the poem, but additionally it also shows that the narrator can accept what has happened even though she regrets it. The language creates a lot of emotional images and never any anger, which is surprising. The form and structure of 'Mean time' shape the meanings of the poem, as it goes from stanza to stanza; it is emphasising life as a whole. First your relationship breaks up and your grieve your loss. ...read more.

With both of these poems Duffy manages to take us inside relationships, which are both female affairs. Similar the language in both poems explore longing, death and love, 'mean time' describes how time is finite, and before you no it you will be 'dead', additionally 'Valentine' describes the harsh elements of love it will bring grief and tears. Further more another poem which also emphasises the harshness of love is 'Havisham' the language is this poem is similar to the previous poems, in tone and emotion. The poem is again from a woman's perspective; she claims how she got stood up on her wedding day by her 'beloved sweetheart bastard'. The poem is more complex than the other two mainly because of the gap in time they were written. Similar to 'Mean Time', the poem shows how the woman cannot move on, she also is mourning her loss, ''not a day since then I haven't wished him dead' the narrator is finding it hard to move on she longs for 'sweet' revenge. All of these poems narrators are finding it hard to move on they are all blinded by 'heartache' and seem to have loss any sense of life and how precious it can be. Words: 1160 ...read more.