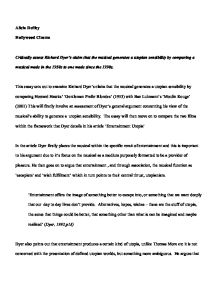 Critically assess Richard Dyer&amp;#146;s claim that the musical generates a utopian sensibility by comparing a musical made in the 1950s to one made since the 1990s.

Alicia Duffey Hollywood Cinema Critically assess Richard Dyer's claim that the musical generates a utopian sensibility by comparing a musical made in the 1950s to one made since the 1990s. This essay sets out to examine Richard Dyer's claim that the musical generates a utopian sensibility by comparing Howard Hawks' 'Gentlemen Prefer Blondes' (1953) with Baz Luhmann's 'Moulin Rouge' (2001) This will firstly involve an assessment of Dyer's general argument concerning his view of the musical's ability to generate a utopian sensibility. The essay will then move on to compare the two films within the framework that Dyer details in his article 'Entertainment Utopia' In the article Dyer firstly places the musical within the specific remit of entertainment and this is important to his argument due to it's focus on the musical as a medium purposely formatted to be a provider of pleasure. He then goes on to argue that entertainment , and through association, the musical function as 'escapism' and 'wish fulfilment' which in turn points to their central thrust, utopianism. 'Entertainment offers the image of something better to escape into, or something that we want deeply that our day to day lives don't provide. Alternatives, hopes, wishes - these are the stuff of utopia, the sense that things could be better, that something other than what is can be imagined and maybe realized' (Dyer, 1992,p18) Dyer also points out that entertainment produces a certain kind of utopia, unlike Thomas More etc it is not concerned with the presentation of defined utopian worlds, but something more ambiguous. He argues that the utopian sensibility that entertainment is capable of producing is reliant upon emotions; presenting what utopia would feel like rather than how it would be organized. Through analysing 'Gentlemen Prefer Blondes' and 'Moulin Rouge' using the framework of the five 'utopic' categories that Dyer outlines, energy, abundance, intensity, transparency and community, I hope to asses to what extent each of the films achieves this 'escapist' utopian sensibility and how this is achieved. ...read more.

In 'Moulin Rouge' this intensity is perhaps more visible in the storyline itself, for it is simply a story about love, as we hear repeated throughout the film 'This story is about truth, beauty and above all love' However once again we see that this not fully conformist with Dyer's critique, even at the start of the film we know that Satine is dead, a completely non utopian ending for a film. There is also evidence that the intensity of the love that Christian and Satine shares actually prevents them from escaping and consigns her to death for it results in him revealing his love for her in an argument with his rival, the Duke. However there are more Utopian elements to there intense love affair, he is the lowly writer who wins the heart of the most popular courtesan with a simple song, Elton John's 'Your Song' at first defying her pimp's claim that they are creatures of the underworld who can't afford to love. Her love for him then grows in ways she couldn't imagine and is willing to leave the life she had dreamed of so they can be together regardless of what should happen ...... she is only unable to do so because she is informed of her fate and the threat to his life. Their separation on the night that she is supposed to spend with the Duke marks the most intense moment of the film as the company perform a tango version of the Police's 'Roxanne,' dramatically lit with a virtual spotlight on the couple performing the dance the camera follows them round the dance floor concentrating on their footwork and facial expressions to convey the emotional pain of the situation. Ultimately we see that in 'Moulin Rouge' there are many more layers behind the original utopian intensity of the love between Satine and Christian which do not fit into Dyer's critique, in 'Moulin Rouge' the lovers probably have more to battle against than most of the audience ...read more.

The community of the Moulin Rouge exists in it's own Utopia... as long as you are willing to sell your body and soul to it, once Satine decides to leave the community she is doomed to die, and to preserve his community Zidler is willing to leave her loveless for the remainder of her life Thus we see that musicals can create the utopian sensibility that Dyer outlines, we certainly see this in the case of 'Gentlemen Prefer Blondes' where the abundant lifestyle, true friendship and love and fairytale ending would instil in any audience member the 'feel good factor' of utopia. In 'Moulin Rouge' however we see that these elements work on another level, there is the fairytale romance, the excitement, the material abundance and the support of the community but it all comes at a price. Yes the audience member is thrilled by the opening lavish scenes and their heartstrings are pulled by the exemplary love of Satine and Christian but I doubt that they leave the cinema light hearted. The utopian sensibility is successfully created by Luhrmann and the story is indeed about 'truth, beauty and above all love' but it is also about the deceit, ugliness and heartbreak that can lie beneath these, a utopian sensibility turned on it's head? Perhaps this contrast in the way in which the utopian sensibility is utilized by Hawks and Luhrmann is a sign of the times in which their films were created, 'Gentlemen Prefer Blondes' is a film of the 1950s, the time of the post war social and economic boom, meanwhile 'Moulin Rouge' is the one of the fist musical's of the 21st century and perhaps in it's timely portrayal of love in the face of corrupting commerce it provides us with the only form of utopia that the audience can remotely relate to in today's consumerist society. Reference: R Dyer; Entertainment Utopia, (1976) ...read more.