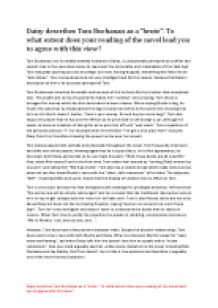 Daisy describes Tom Buchanan as a brute. To what extent does your reading of the novel lead you to agree with this view?

﻿Daisy describes Tom Buchanan as a ?brute?. To what extent does your reading of the novel lead you to agree with this view? Tom Buchanan, the incredibly wealthy husband to Daisy, is undoubtedly portrayed as a selfish and violent man in the novel and comes to represent the immorality and materialism of the ?Jazz Age?. Tom had great sporting success at college, but now, having stopped, everything else feels like an ?anti-climax?. Tom is prejudiced and not very intelligent and for this reason I believe that Daisy?s description of him is an accurate portrayal of Tom. Tom Buchannan inherited his wealth and because of this he feels like he is better than everybody else. ...read more.

Tom bullies people both verbally and physically throughout the novel. Tom frequently interrupts and talks over other people, showing again that he is supercilious. In his first appearance, he interrupts both Daisy and Jordan so he can make his point, ?Well, these books are all scientific?. Also, when Nick meets Tom for the first time, Tom orders him around by ?turning [Nick] around by one arm? and telling him ?We?ll go inside?. Tom also has a violent streak which really comes across when we see him break Myrtle?s nose with the ?short, deft movement? of his hand. The adjective, ?deft?, meaning skilful and quick, shows that this display of violence has no effect on Tom. ...read more.

Also you could arguably say that, unlike many characters in the novel, including Nick Carraway and Jay Gatsby, that Tom doesn?t try to hide is true opinions and therefore is arguably one of the more honest characters. Tom Buchanan, through both his actions and what he says, shows clearly that he, in the most part, fits the description of a ?brute? as described by Daisy. He is unfaithful to Daisy and selfishly pursues his desires with no regard for the consequences. As Nick states, ?they smashed up things and creatures and then retreated back into their money and let other people clean up the mess? Daisy describes Tom Buchanan as a ?brute?. To what extent does your reading of the novel lead you to agree with this view? ...read more.