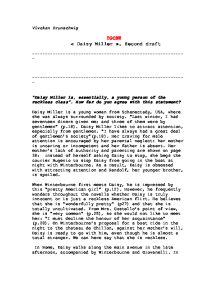 &quot;Daisy Miller is, essentially, a young person of the reckless class&quot;. How far do you agree with this statement? Daisy Miller is a young woman from Schenectady, USA, where she was always surrounded by society

In Rome, Daisy walks along the main avenue in the late afternoon, accompanied by Winterbourne and Giovanelli. In Rome, it is considered improper for a woman to be accompanied in public by two men but, once again, Daisy is reckless and stubborn because she refuses to get into Mrs. Walker's carriage to save her reputation: "If this is improper, Mrs. Walker, then I am all improper, and you must give me up." (p.61) She also tells Winterbourne: "The young ladies of this country have a dreadfully poky time of it; I don't see why I should change my habit for them." (p.68). She has decided to be "improper" and to act the way she pleases, even when Winterbourne advises, "You must go by the custom of the place." ...read more.

I was bound to see the Colosseum by moonlight", which is a very inappropriate thing to say in those circumstances. She is determined to go to the Colosseum by moonlight and she does not care what other people tell her. In fact, when Giovanelli admits to Winterbourne that the place is dangerous for Daisy, she is not embarrassed at all (p.84). At this moment, Winterbourne understands that Daisy is reckless and he no longer cares whether "she should be 'talked about' by low-minded menials."(p.86) Daisy defies people: she does the exact opposite of what people tell her, even if her reputation or life is in danger. I agree with the statement that Daisy was a young woman of the reckless class. After being reckless in her companions, she is indiscreet in her actions which ultimately causes her tragic death. ?? ?? ?? ?? ...read more.