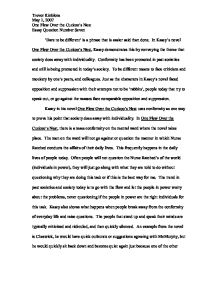 'Dare to be different' is a phrase that is easier said than done. In Kasey's novel One Flew Over the Cuckoo's Nest.

'Dare to be different' is a phrase that is easier said than done. In Kasey's novel One Flew Over the Cuckoo's Nest, Kasey demonstrates this by conveying the theme that society does away with individuality. Conformity has been promoted in past societies and still is being promoted in today's society. To be different means to face criticism and mockery by one's peers, and colleagues. Just as the characters in Kasey's novel faced opposition and suppression with their attempts not to be 'rabbits', people today that try to speak out, or go against the masses face comparable opposition and suppression. Kasey in his novel One Flew Over the Cuckoo's Nest uses conformity as one way to prove his point that society does away with individuality. ...read more.

The people that stand up and speak their minds are typically criticized and ridiculed, and then quickly silenced. An example from the novel is Cheswick, he would have quick outbursts or suggestions agreeing with McMurphy, but he would quickly sit back down and become quiet again just because one of the other patients on the ward would say one disapproving remark. This may be slight overstatement for people today, but with enough pessimism and mockery, people that were once loud and vociferous become quiet and timid. Even the strongest of willed people are eventually worn down and silenced. McMurphy was even overcome by conformity, and silenced. No matter how hard someone tries, conformity in society will not be overcome. In One Flew Over the Cuckoo's Nest, all of the men in the mental ward had their own individual opinions and wants, but most of them were afraid to voice their opinion. ...read more.

Nurse Ratched's animosity towards the men of the ward represents how society destroys people's individuality. Kasey's theme that society does away with individuality is without doubt valid. In societies, past and present conformity has been encouraged and individuality has been looked down upon. Kasey demonstrates this skillfully by using mental ward patients as the members of conformed society and Nurse Ratched as the oppressor, making certain no one speaks up or gets out of line. Nurse Ratched is not the only one oppressing the men in the ward; they are acting as their on oppressor's by not supporting on another's beliefs and ideas. Just like in the world today, not enough people are supporting each other's ideals and beliefs. People today are generally concerned about themselves, and not giving needed support to others. Trevor Kinblom May 1, 2007 One Flew Over the Cuckoo's Nest Essay Question Number Seven ...read more.