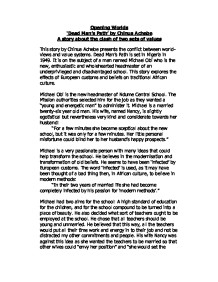 'Dead Man's Path' by Chinua Achebe - A story about the clash of two sets of values.

Opening Worlds 'Dead Man's Path' by Chinua Achebe A story about the clash of two sets of values This story by Chinua Achebe presents the conflict between world-views and value systems. Dead Man's Path is set in Nigeria in 1949. It is on the subject of a man named Michael Obi who is the new, enthusiastic and wholehearted headmaster of an underprivileged and disadvantaged school. This story explores the effects of European customs and beliefs on traditional African culture. Michael Obi is the new headmaster of Ndume Central School. The Mission authorities selected him for the job as they wanted a "young and energetic man" to administer it. Michael is a married twenty-six year old man. His wife, named Nancy, is slightly egotistical but nevertheless very kind and considerate towards her husband: "For a few minutes she became sceptical about the new school, but it was only for a few minutes. Her little personal misfortune could blind her to her husband's happy prospects." ...read more.

This is a key example of Michael's wife's self-centredness. Michael managed to transform the school gardens into a place of beauty. One day while he was admiring his work, he saw an old woman walking along a disused path that ran through the school compound. This annoyed Michael and he inquired one member of his staff about it. He found out that this path is apparently very important and blessed as it connects the village shrine to the cemetery. Michael was very selfless at this moment and decided to close down the path, as in a few days a "white inspector" would be coming to visit the school. Michael felt that the school couldn't be used as a 'through fare.' Soon the path was closed, and blocked of with barbed wire. A few days later the village priest called upon the headmaster. The priest talked with Michael for a while. He wanted Michael to reopen the path. ...read more.

This is basically saying that if you do what I say, we shall be at peace. The path does no harm; you carry on with your school, and let the path be reopened. The priest then leaves Michael alone. I believe he does this as he wishes for Michael to reflect on what he has just said. A few days later a woman died while giving birth to a child. A diviner (spiritualist) prescribes heavy sacrifices to propitiate ancestors insulted by the fence. This therefore means that the diviner is angry that the path has been closed, and blames the death of the women on the closing of the path. The diviner believes that ancestors and dead people have been insulted by the blocking of their path. Thus, Michael's modernised school is pulled down and the gardens are trampled upon. The inspector then came to visit and wrote a very mean report about the school and the situation between the school and the village. This story shows us how modernisation can clash with traditionalist values. The closure of the path clashes with the views of the people and the priest. ...read more.