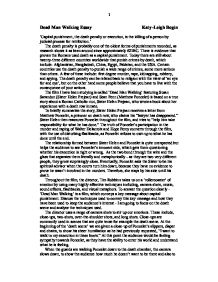 Dead Man Walking Essay Katy-Leigh Bogin 'Capital punishment, the death penalty or execution, is the killing of a person by judicial process for retribution.' The death penalty is probably one of the oldest forms of punishments recorded, as research shows it as been around since approximately 621BC. There is evidence that proves the Romans used death as a capital punishment. Today there are still about twenty-three different countries worldwide that punish crimes by death, which include: Afghanistan, Bangladesh, China, Egypt, Pakistan, and the USA. Certain countries use the death penalty to punish a wide range of crimes, some more serious than others. A few of these include: first degree murder, rape, kidnapping, robbery, and spying. The death penalty can be related back to religion with the view of 'an eye for and eye', but on the other hand some people believe that you have to live with the consequence of your actions. The film I have been studying is called 'Dead Man Walking' featuring Susan Sarandon (Sister Helen Prejean) and Sean Penn (Matthew Poncelet) is based on a true story about a Roman Catholic nun, Sister Helen Prejean, who wrote a book about her experience with a death row inmate. To briefly summarize the story, Sister Helen Prejean receives a letter from Matthew Poncelet, a prisoner on death row, who claims his "lawyer has disappeared." Sister Helen then reassures Poncelet throughout the film, and tries to "help him take responsibility for what he has done." The truth of Poncelet's participation in the murder and raping of Walter Delacroix and Hope Percy converts through the film, with the use of disturbing flashbacks, as Poncelet refuses to own up to what he has done until the end. The relationship formed between Sister Helen and Poncelet is quite unexpected but helps the audience to see Poncelet's innocent side, which gets them questioning whether his execution is right or wrong. ...read more.

Therefore it isn't really appropriate to the crime situation. As the music is forgiving it makes us question whether the death should be used to punish Poncelet. The emotional dream-like music plays until Poncelet is in the death chamber, and the curtains are being opened for the audience to watch this outrageous performance. But it suddenly stops as the reality of the death chamber hits us again. The curtains are opened which sounds like an audience at a theatre clapping, revealing Poncelet on the cross. A strange and unusual low-bass droning music occurs in the first truthful flashback which is accompanied by a bass drum sounding with symbol beats every eight seconds. Then an Indian-like music also accompanies that. All this represents how alien and 'creepy' the situation is. During later flashbacks, there is a screaming-like sound in the music. I personally think this represents Hope Percy, as it sounds similar to her screaming as she was being raped. Eerie music continues while the cameras pan around to find Hope and Walter's bodies in the woods. The music lunges and the male voice raises louder when the bodies are shown on screen, which is quite peculiar and makes the audiences hearts skip a beat. The music ends with the sudden sounding of the flat line to show Poncelet is dead which gives relief to the audience. The film ends with music of a lighter note to show things have been sorted out and are now settled. The sound effects that the director, Robbins, effectively places into the film play a big part, as they make the audience question. They grab the audience's attention dramatically and draw them to a particular person or object, which causes them to ask themselves, 'should this execution be allowed to be carried out?' I personally think it shouldn't as Poncelet says himself, "I think killing is wrong, no matter who does it, whether it's me, y'all, or your government." ...read more.

Also God wasn't ready to accept Walter and Hope but he was ready to accept Poncelet as "he has received the sacraments of the church before he died." The overall message of the film is to make people think about whether capital punishment is acceptable or not and why it should or shouldn't be used. Personally, I was shocked after watching the film, as it was not what I was expecting. It was very dramatic and had me emotional at times. The film had me changing my mind about whether Poncelet should be executed all the way through, which the director has purposely done. As we are shown many different sides of Poncelet, we are shown an innocent side, which only Sister Helen saw and then next minute he is back to his evil side again. In conclusion I didn't think Poncelet should have been killed, after all he did confess and apologise. But saying that, I thought capital punishment was unacceptable before I watched the film, therefore other people may not agree with me. I thought the directors use of flashbacks worked particularly well. I feel this was because they made me look deeper into the film and kept me watching wanting to know what happened next. I liked the way all the flashbacks became more realistic towards the end of the film, that made the final flashback given extremely powerful as it was the full truth. All the techniques presented can be regarded as highly successful from my point of view and I don't think they could have been improved at all. If they were all powerful, the film would be in your face and it would be completely pointless. I would recommend this film to a friend as it has an important message to it and it makes you think. If everybody who watched it asked someone else to watch it, a lot more people would be aware of how harsh capital punishment is. Plus it may reduce the use of capital punishment in other countries. 1 ...read more.