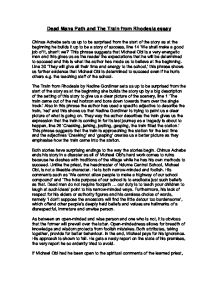 Dead Mans Path and The Train from Rhodesia essay.

He gets a nasty report on the state of his premises, the very report he so ardently tried to avoid. If Michael Obi had he been open to the spiritual comments of the learned priest, the ancestors would not have been 'insulted by the fence', the young woman might not have died, the beautiful hedges might not have been trampled to death and one of the school buildings might not have been pulled down. In brief, had Michael been more like the priest, he would have received the exemplary report he so desperately wanted. Nadine Gordimer ends The Train from Rhodesia in a way to the expectations that she gives us from the beginning of the story as at the end of the story the woman who wanted the lion at the start but rejects it when the man buys it for her. We get the expectation that the woman wanted the lion by the way Nadine Gordimer describes the lion 'It was a lion, carved out of soft dry wood...with impressionistic detail burnt in' line 33-35. We are surprised from this ending, which shows us that the woman cared for the hard work, which the man has done in making the lion and she feels that it would be like robbing the man who made the lion if they did not offer the right price for the lion. ...read more.

This way is very effective, as she has created a very clear picture in our head of the train in the setting. She uses a lot of adjectives to describe movement and the lion. 'The heat of shame mounted through her legs and body and sounded in her ears like the sound of sand pouring' line 172-174 this simile is very effective as she shows that the woman is very depressed and is feeling shamed and this gives a very good image of a woman upset. In conclusion these two stories are very different in the terms of style, setting, language and characters. The think that they had in common was a surprising ending which drew the reader into the stories to keep reading on. In Dead Mans Path the ending is very effective because by the battle of tradition against modern society. The ability of the writer to create an effective ending as this shows us that he had thought of the ending hard when the priest said problems would arise if he did not stop. The Train From Rhodesia keeps us in suspense by the clear picture created by the reader and this is very good as we can picture very thing that happens. Overall I say that the two stories are well written in keeping suspense and the different style in which the stories are written. By Tajinder Ghattaora 11c ...read more.