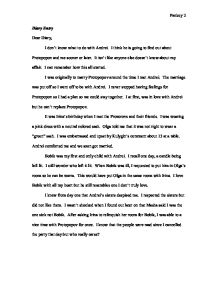 Diary Entry Dear Diary, I don't know what to do with Andrei. I think he is going to find out about Protopopov and me sooner or later. It isn't like anyone else doesn't know about my affair. I can remember how this all started. I was originally to marry Protopopov around the time I met Andrei. The marriage was put off so I went off to be with Andrei. I never stopped having feelings for Protopopov so I had a plan so we could stay together. I at first, was in love with Andrei but he can't replace Protopopov. It was Irina's birthday when I met the Prozorovs and their friends. I was wearing a pink dress with a neutral colored sash. Olga told me that it was not right to wear a "green" sash. I was embarrassed and upset by Kulygin's comment about 13 at a table. Andrei comforted me and we soon got married. ...read more.

He alone does not own the house, which made my deed even better. The others realized that Andrei owes "everyone" some money. I invited Protopopov to come to the house during the sudden departures. It wasn't wrong to have Protopopov sit with Sofochka and Andrei to sit with Bobik. I mean, the children are sitting with their correct fathers. I got some revenge on the Prozorov sisters for their comment on my sash by telling Irina that her sash didn't suit her at all. Now, I am all "alone". I don't know how I am going to break off my marriage to Andrei. He is a good man but I don't truly love him. I feel bad by what I might do to Bobik. I never wanted to hurt him or even Sofochka. Sofochka would be hurt because she believes Andrei is her father as well. I just don't know what to do. ...read more.

Natasha knew that others knew of her affair with Protopopov. Natasha took her affair and had another child, this time with Protopopov, not Andrei. Natasha's actions added more pressure the Prozorov household. The three sisters dreams of Moscow were never fulfilled. The sisters relied on Andrei for their dreams to come true. Natasha played a role in why Andrei never came through for his family. Andrei was indeed in love with Natasha. Andrei failed to realize at first what Natasha was doing with his money that he had the mortgage (288). This was a possible result for the Prozorovs' "demise" (Natasha taking over the household from the family). Natasha is a very powerful character. Her diary entry tells Natasha's reminiscing of her time with the Prozorovs. The entry shows a recount of how Natasha lived her life with the Prozorov family. Natasha did not care who she hurt as if she was getting her revenge on a family who did not like her from the start. The wife of a weakened Andrei took him for advantage and easily became head of a weakened family. ...read more.