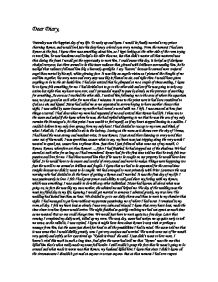 Dear Diary, Yesterday was the happiest day of my life. To wake up and know I would be finally married to my prince charming Romeo, and would look into his deep honey colored eyes every morning, From the moment I had seen Romeo at the feat, I knew there was something about him, as I kept looking at the other side of the room trying to track him, he was handsome and looked a bit older than me, but that didn't matter all that mattered was that during the feast I would get the opportunity to meet him, I could swear this day, it looked as if darkness cloaked everyone, but there seemed to be this inner radiance that glowed with brilliance surrounding him. As he walked that radiance followed him like a heavenly spotlight. I say "heaven" because he seemed more conjured angel than mortal by his soft, white glowing face. It was like an angelic vision as I pictured the thought of me and him together, his every move and every step was like it floated on air, and right then I would have given anything to be in the air beside him. I had also noticed that he glimpsed at me a couple of times smiling, I knew he to knew felt something for me. I had decided not to go to the other side and see if he was going to take any action but right then my heart won over, and I persuaded myself to ...read more.

I remained in my room all day. I felt my heart beat so slowly I was very calm and relaxed. I knew that every heart beat, made the time closer to when Romeo would arrive. The night finished so quickly realizing we had not spent as much time as we wanted. But no one could change time. We would just have to meet again in a few days. Later that evening I completed my daily work, tidied up my room. The next day, nurse had woken me up quite early to tell me news, as she called it, I was excited, I knew it might have been about Romeo's next visit or perhaps a message from him, but the nurse just shook her head to all the possibilities I had in mind. The nurse told me that it was news that I would dislike greatly, now I got very anxious and worried. The words came out of her mouth very quietly and softly as her eyes tiered up. "Tybalt is Dead" she said. I just didn't want to here more, I haven't cried this much in such a long time. And after the nurse had told me that "Romeo" was the one that killed him that's what really made my tears fall harder. I still couldn't grasp the fact that he wasn't going to be around and what made it worse was that Romeo, my husband killed him! ...read more.

I felt like I have done something so mischievous. I know that I had the right of who I wanted to marry, if marriage was by force the world would have been all filled with enemies and violence. I had replied and said that I didn't want to marry Paris because he wasn't in my interest, and that I didn't admire him as a husband. My father didn't wait a moment and slapped me with all his force across the face. I felt my face go so red and the force just made me fall hard against the floor. He then impatiently stepped out of my room, yelling thoughts to himself. I had then begged my mom to dely this marriage any way, or I will then prefer to lie in that dim monument where Tybalt lies. My mother had reacted very strangely and had decided to not put her self in this and to take my dad's side. Now it was only me and the Nurse. She had told me to just marry Paris, but I had replied with all my force lifting myself up of the ground and saying no. Than I just knew that I would have no choice. I took a step or 2 towards the nurse and had told her that I was going to make my way to Friar Lawrence to make confession since I have displeased my father, which I didn't mean I had meant that my only option left for me was to die. ---------------------Juliet ...read more.