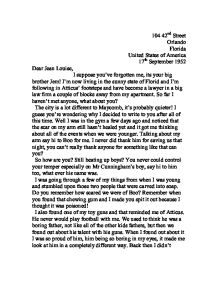 104 42nd Street Orlando Florida United States of America 17th September 1952 Dear Jean Louise, I suppose you've forgotten me, its your big brother Jem! I'm now living in the sunny state of Florid and I'm following in Atticus' footsteps and have become a lawyer in a big law firm a couple of blocks away from my apartment. So far I haven't met anyone, what about you? The city is a lot different to Maycomb, it's probably quieter! I guess you're wondering why I decided to write to you after all of this time. Well I was in the gym a few days ago and noticed that the scar on my arm still hasn't healed yet and it got me thinking about all of the events when we were younger. Talking about my arm say hi to Boo for me. I never did thank him for saving us that night, you can't really thank anyone for something like that can you? So how are you? ...read more.

Like the time he told us that you never understand why someone does something until you climb into their skin and experience it for yourself, I think that was his way of saying, "You can't judge a book by its cover". Do you remember our friend Dill? He always got us into trouble didn't he? Remember when he ran away and stayed with us? I walked past a yard the other day that looked just like old Ms Dubose's yard. Do you remember when I trashed her flowers because she said that Atticus defended Niggers? Atticus made me go over there after, again he had a reason that I didn't get as always. I didn't understand why she wanted me to read to her, I realised after she died, I was glad that Atticus made me go over there once I realised why she made me read to her. It wasn't just Ms Dubose that we had to put up with though. I remember that you wouldn't take anything off anyone, always getting into fights over it, which didn't help Atticus. ...read more.

I think about how he made Mr Ewell's left handedness make him a suspect because of the bruising on Mayella's eye. I also think about how the jury was prejudiced against Tom because he was black. I often worry that if we were as old as the judge and jury that we would be prejudiced against him. I couldn't understand why Tom was found guilty, especially with all of the evidence in his favour, but now I understand prejudice. I was so confused when Tom tried to escape. I couldn't understand why he would throw away his life like that, but now I know that Bob Ewell threw it away when he accused him of raping Mayella. I hope we can see each other soon, maybe when I have time I will come and visit. If not you could come and stay with me, I have to warn you though my apartment isn't exactly the White House. Write back as soon as you can okay? See you soon Scout, JEM ...read more.