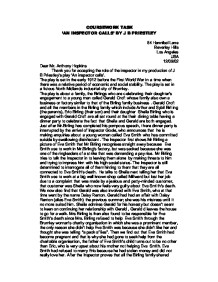 Dear Mr. Anthony Hopkins Thank you for accepting the role of the inspector in my production of J B Priestley's play 'An inspector calls'.The play is set in the

COURSEWORK TASK 'AN INSPECTOR CALLS' BY J B PRIESTLEY 54 Hannibal Lane Beverley Hills Los Angeles USA 12/09/02 Dear Mr. Anthony Hopkins Thank you for accepting the role of the inspector in my production of J B Priestley's play 'An inspector calls'. The play is set in the early 1912 before the First World War in a time when there was a relative period of economic and social stability. The play is set in a fictous North Midlands industrial city of Brumley. The play is about a family, the Birlings who are celebrating their daughter's engagement to a young man called Gerald Croft whose family also own a business or factory similar to that of the Birling family business. Gerald Croft and all the members in the Birling family which include Arthur and Sybil Birling (the parents), Eric Birling (their son) and their daughter Sheila Birling who is engaged with Gerald Croft are all sat round at the their dining table having a dinner party to celebrate the fact that Sheila and Gerald are both engaged. Just after Mr.Birling has completed his pompous speech, there dinner party is interrupted by the arrival of Inspector Goole, who announces that he is making enquiries about a young woman called Eva Smith who has committed suicide by swallowing disinfectant. The Inspector first shows Mr Birling a picture of Eva Smith that Mr Birling recognises straight away because Eva Smith use to work in Mr.Birling's factory, but was sacked because she was one of the ringleaders of a strike that was demanding a pay rise. Mr Birling tries to talk the Inspector in to leaving them alone by making threats to him and trying to impress him with his high social status. The Inspector is still determined to interrogate all of them hinting to them that they are all connected to Eva Smith's death. He talks to Sheila next telling her that Eva Smith use to work at a big well known shop called Millward but lost ...read more.

Birling by replying "You're offering the money at the wrong time". Inspector Goole is a man of high principles; he doesn't degrade himself by accepting bribes to shut up or being frightened of losing his job. Overall the inspector is a character that is portrayed as a hero for people who strongly believe in socialism, he is also a very mysterious character since we never know if he is actually an inspector or not and what is so eerie about him is that the event which he has come to make enquiries about has not happened yet. The inspector treats each character in the play in a certain manner. To understand how he reacts with each character I firstly need to talk about each one of the characters. The first character I will talk about is one I have already talked a lot about i.e. Arthur Birling. He describes himself as a "hard headed business man, everything he thinks of is in business terms, like when he says that the engagement between Sheila and Gerald would be a good way for Crofts limited and Birling and company to end their business rivalry and work together "for lower costs and higher prices", he see the engagement more like a business transaction. He doesn't agree with the ideas of socialism, he calls people who believe in socialism "cranks", the inspector is one of these so called "cranks". He believes in capitalism so strongly that in one point of the play he says "that a man has to make his own way - has to look after himself -and his family too" this shows he doesn't really care about any one else except him self and his own family showing how selfish he is. Mr. Birling is the sort of person who thinks his always right, he is very arrogant, and an example of this is the statements he makes regarding the First World War and about the Titanic. ...read more.

The stage will be set up so that there will be a table that is oval shaped on the left hand side of the stage. The people will be seated in such a manner on one side of the table so that their face can be seen. The table with the telephone will be on the left side of the stage in front of the table. The door that should lead to the drawing room and the door that the servant Edna uses will be on the left hand side, behind the table. The door that Inspector Goole enters from will be on the right hand side of the table. On the far right hand side of the stage should be the fireplace with a couple of chairs around it. I will also need to make sure that there is no obstruction that blocks the view of the door, so that the Inspectors entrance can be seen well and an image of massiveness is created because the size of the door it self is not much big,but the first thing you should see is a long shadow coming from the door, this can be done using spot lights. I think I will keep the stage directions that were made by Priestly. The language used in 'An Inspector Calls' is quite simple and uses easy to understand language even though the book uses phrases and words that are rarely used to day e.g. the phrase "fiddlesticks" is not used by many today. The way in which The Birlings speak sound very posh, but the way in which the Inspector talks looks like it is just standard English. The play could also begin where it has ended, so they could make the play continuing from there, because this ending is very sudden, it leaves you wondering what will happen next. I hope you find my suggestions helpful and if you have any concerns contact me on 05372 38729. Yours sincerely (Director of the new production of 'An Inspector calls'.) ...read more.