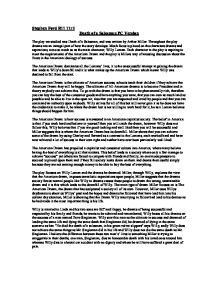 Death of a Salesman PC Version.

Stephen Ford R11 11r2 Death of a Salesman PC Version The play we studied was Death of a Salesman, and was written by Arthur Miller. Throughout the play dreams are an intregal part of how the story develops. Much focus is placed on the characters dreams and aspirations, none so much so as the main character, Willy Loman. Each character in the play is aspiring to meet the requirements of the American Dream and the play is Millers way of arousing discussion about the flaws in the American ideology of success. The American Dream dominates all the Lomans' lives, it is the unsuccessful attempt at gaining the dream that leads to Willy's downfall and it is what makes up the American Dream which meant Willy was destined to fail from the start. The American Dream is the ultimate of American success, schools teach their children if they achieve the American Dream they will be happy. The ultimate of All-American dreams is to become President and in theory anybody can achieve this. To go with the dream is that you have to be phenomenally rich, therefore you can buy the best of the consumer goods and have anything you want, that you can own as much land as possible and be able to live in the open air, also that you are respected and loved by people and that you can command an authority upon anybody. Willy strives for all of this but will never gain it as he does not have the credentials to make it, ...read more.

He also refuses to accept reality, when Biff, Happy, and Willy are in the restaurant, Happy tries to shield his father from the fact that Biff did not get the business opportunity he went to get, he does not want anybody to know how much he and his brother have failed, especially Willy. When Willy was younger he dreamed of following Ben, his brothers', route of success, this was being an entrepreneur, Willy dreamed of going to Alaska and stumbling across his fortune just as Ben had done by ending up in Africa. After this opportunity had been passed up Willy continued to dedicate his life to being a successful salesman, basing his hopes on the results Dave Singleman gained by being a salesman. Willy dreamed that he would become successful and that his sons' would follow in his footsteps. In the real-time aspect of the play, all Willys hopes are pinned on his sons as he now has no chance on being a success himself as he has lost his job, he dreams of Biff finally achieving the "potential" Willy believes he has. Willy dreams of leaving something behind him after his death, he wants to leave his insurance money to Biff so that Biff can become a success in his life, he believes he can be worth more to his family dead than alive saying "After all the highways, and the trains, and the appointments, and the years, you end up worth more dead than alive". ...read more.

His dreams of being as successful as Dave Singleman led him to deny what he truly wanted, when if truth be told, all Willy wanted to do was work with his hands. What Willy failed to realise was that there are millions like him, each chasing his dream, even when Biff, his own son told him he still didn't believe, "Pop! I'm a dime a dozen, and so are you!" "I am not a dime a dozen! I am Willy Loman, and you are Biff Loman!", he does not see that the Lomans do not deserve success more than any other family, he lives his whole life believing they do. Willy wanted more than anything to go with Ben and he was indeed capable of following the pioneer route to success, he had completed large improvements on the house and before he committed suicide he had planted a garden so that he could leave something worthwhile in the world, all this shows he was not afraid of hard work. Willy denied himself what he truly wanted to pursue the American Dream, to be like Dave Singleman and be loved and respected by other men. Willy died believing that he would be more happy pursuing an uncatchable fantasy rather than being happy with what he had. The one hope for the Lomans is that Biff realises this and so long as he as the substance of character he will succeed where his father failed and become happy. ...read more.