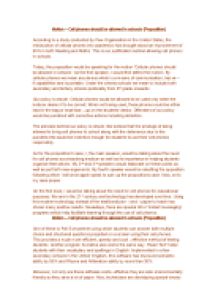 Debate -Cell phones should be allowed in schools (Proposition)

﻿Motion ? Cell phones should be allowed in schools (Proposition) According to a study conducted by Pew Organisation in the United States, the introduction of cellular phones into academics has brought about an improvement of 50% in both Reading and Maths. This is our justification behind allowing cell phones in schools. Today, the proposition would be speaking for the motion ?Cellular phones should be allowed in schools.? As the first speaker, I would first define the motion. By cellular phones we mean any device which is a means of communication, has wi ? fi capabilities and is portable. Under the criteria schools we mean to include both secondary and tertiary schools preferably from 6th grade onwards. Our policy is simple. Cellular phones would be allowed to be used only when the lecturer deems it to be correct. When not being used, these phones could be either kept in the bag or kept face ? up on the students? desks. ...read more.

Nowadays, there are special IM or ?instant messaging? programs which help facilitate learning through the use of cell phones. Motion ? Cell phones should be allowed in schools (Proposition) One of these is Poll Everywhere using which students can answer both multiple choice and structured questions projected on a screen using their cell phones. This provides a much more efficient, speedy and cost ? effective method of testing students. Another program Socrative also works the same way. ?Read Text? helps students with their vocabulary and spellings in English. Implemented in a few secondary schools in the United Kingdom, this software has improved semantic ability by 50% and Rhyme and Alliteration ability by more than 30%. Moreover, not only are these software costs? effective they are also environmentally friendly as they save a lot of paper. Also, technicians are developing special lenses which when attached to the camera of a cell phone can work as a microscope. ...read more.

Cell phones however are much less bulky and at the same time much more efficient. The best examples of efficiency are homework reminders and calendar synchronisation. Motion ? Cell phones should be allowed in schools (Proposition) Homework reminders help students become more responsible and regular in submitting homework. Calendar synchronisation allows teachers to integrate their calendars with those of their pupils. This allows them to remind students of important dates and timings. Both these functions are served by calendars including the Google Calendar program. Once again, planners on cell phones are much more environmentally friendly than those made out of paper as they save paper and trees. Therefore, I would conclude by saying that allowing cell phones in schools would allow them to be used for educational purposes as well as for planning. Our policy is beneficial not only to the students and teachers but also to the community. By banning cell phones we are only fighting a losing battle and thus I would request you all to go with our side of the house since we fight in the best interest of all. ...read more.